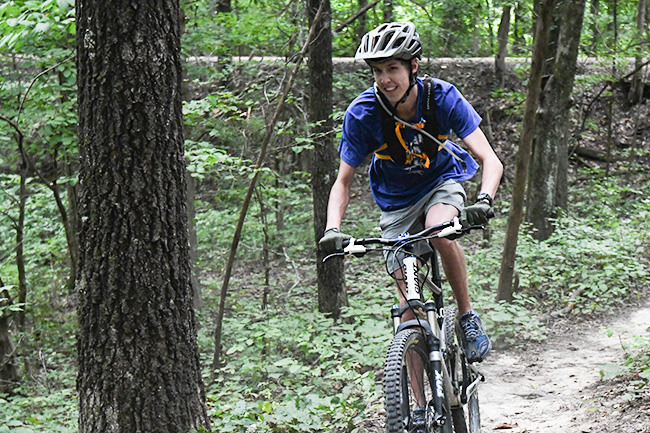 A cyclist races in the Bike for Badges race at the South Campus Rail Trail in Oxford, Miss. on Saturday, August 26, 2017. Bike for Badges is a ten mile charity bike race organized by Officer Blake Horton..

While serving in the U.S Army in Afghanistan in the spring of 2007, Blake Horton watched as the wounded and the fallen were flown in by MedEvac close by to where he was performing his duties.

“I was talking to God and just asked him to get me through this,” he said recently. “I told him, ‘I’ll invent the longer-lasting light bulb, or do something to give back to my community.’”

After returning to Oxford, he began working for the Oxford Police Department in 2012 as a reserve officer. In 2013, he was hired as a full-time dispatcher until 2014 when he accepted a position as a patrol officer where he’s been serving and protecting Oxonians since.

An avid mountain biker, Horton came up with an idea to have a mountain bike race about three years ago to help benefit local law enforcement officers.

“It’s also a good time for people to come out and meet us, show them what we do and shake some hands,” he said.

On Tuesday, Horton was recognized by the Oxford Board of Aldermen and given a certificate for outstanding community service for creating the annual Bike for Badges event. The last event was held in May and raised about $950. In 2016, the first year for the event, they raised about $600.

The event is a 10-mile mountain bike race on the former Whirlpool Trail, now known as the South Campus Trail.

“Blake is always upbeat on duty and I’ve never seen him without a smile on his face,” said Mayor Robyn Tannehill. “We appreciate the work he does as an officer and a community member. That’s what makes Oxford special is people who give back to this community day in and day out.”

Oxford favorite ‘The Vegabonds’ return to the Lyric