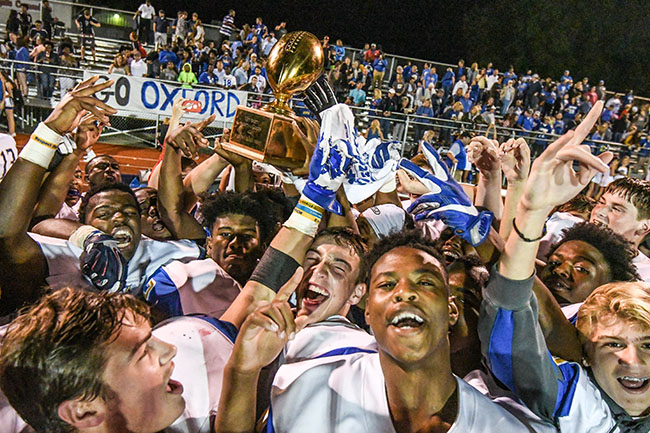 The score of last season’s loss to Lafayette was hung up in the Oxford lockers on Sunday to serve as a reminder.

And it ate at the seniors.

On Friday night, the Chargers were able to take out their frustrations in a 41-17 win over Lafayette at William L. Buford Stadium.

It did not begin as a game that would get out of hand, but once it did Oxford (3-1) made sure their crosstown rivals would remain winless to begin the season.

Oxford got on the board first when junior quarterback John Reece McClure hit Damarea Burt for an 11-yard touchdown pass and for the early 6-0 lead after a missed extra point.

Lafayette responded and gave the sense it would not be a one-sided affair after all with a 27-yard field goal by Robby Langley early in the second quarter to cut Oxford’s lead in half.

After two touchdowns from the Chargers — a 42-yard rush by Wadlington and a 19-yard catch by Burt — and a touchdown pass from Lafayette quarterback Randy Anderson to Drew Dabney, the Oxford led the Commodores 20-10 at halftime.

From there it became all about the Chargers.

Out of the 20-minute intermission, Oxford put up 21 unanswered points in the second half.

Wadlington has his second touchdown of the night in the first two minutes of the third quarter. Later in the period tight end Joe O’Keefe caught his first touchdown of the season, a 39-yard strike down the middle of the field by McClure. Oxford ended the scoring barrage with a 17-yard scamper by KJ Wadley midway through the fourth quarter.

“We had seen some things with some different formations where we thought we had some advantages,” Oxford head coach Chris Cutcliffe said. “It’s a huge deal for the seniors. That’s one of the biggest things in a rivalry game is the seniors. They kind of get to finish the career with the trophy in their field house.”

Lafayette got their final score of the night when Anderson rushed in from a yard out with less than a minute left in the game.

It was another successful night of the two-quarterback formula for Oxford. Sophomore John Mark Meagher went five-of-four for 35 yards and had four carries for 22 yards. McClure finished with 97 yards and three touchdowns through the air.

For Lafayette, Anderson completed 14 of 29 passes for 106 yards and a touchdown. He also had 11 carries for 58 yards and a score.

“We came out and played great,” Oxford linebacker Quentin Wilfawn said. “If we keep this up all year, they’ll see us in the state championship.”

Oxford hosts undefeated Pontotoc (4-0) next week while Lafayette enters their bye week before No. 1 West Point comes to town to begin region play in two weeks.