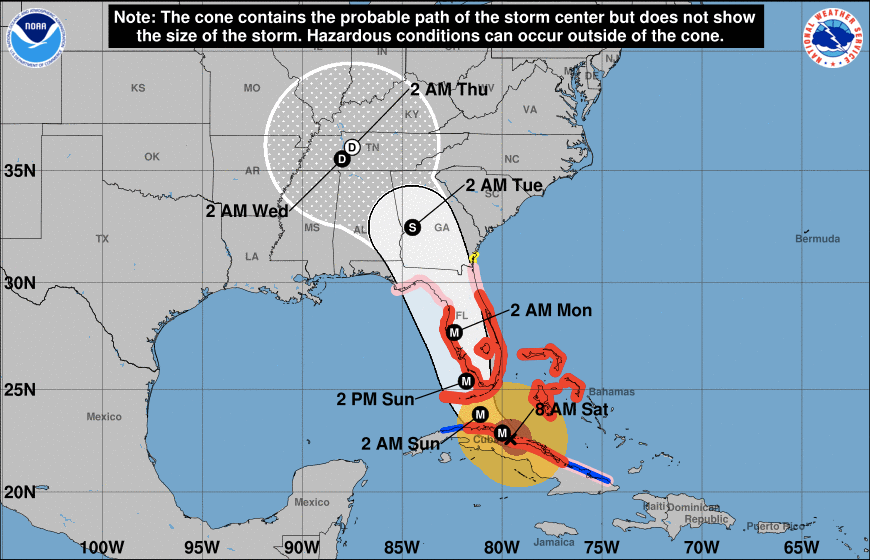 What time will Irma hit Tampa? It appears the hurricane will hit Tampa in the early morning hours Monday. (NOAA)

The Hurricane Irma path 2017 has shifted slightly to the west, putting Tampa, Florida in the crosshairs of what could be a hard direct hit.

What time will Irma hit Tampa on Sunday?

Hurricane Irma is expected to hit Tampa, Florida at about 2 a.m. Monday, or in the overnight hours Sunday night. It could hit Tampa as a Category 3 or 4 storm, according to the latest forecast models developing Saturday.

The twin storms had desperate residents seeking shelter across the Caribbean. In St. Martin, with Hurricane Jose expected to bring torrential rains and a swell of five to six meter (yard) waves at sea, no one was getting in and no one was getting out by plane or by boat.

The last airplane flew in to the battered Grande-Case de Saint Martin airport Friday carrying emergency workers to help with reconstruction as well as specialists who aim to re-establish the island’s cut-off water supply and electricity. Remaining mothers and children were flown out Friday in small 40-person capacity planes.

Hurricane Irma provoked a massive evacuation of Florida after leveling islands in the Caribbean and killing more than 20 people. The U.S. National Hurricane Center said the storm slowed down after slamming into Cuba’s northern coast, but that wind speeds would likely regain momentum as it approached the Sunshine State.

The center said it is looking more likely that the eye of powerful Irma will strike the Florida Keys, southwestern Florida and the Tampa Bay region on Sunday.

Early Saturday, the hurricane center said the storm was centered about 10 miles (15 kilometers) northwest of the town of Caibarien, Cuba, with maximum sustained winds of 130 mph (215 kph). Soldiers and government workers earlier had gone through coastal towns enforcing the evacuation, taking people to shelters at government buildings and schools — and even caves.

Many of Irma’s victims fled their islands on ferries and fishing boats for fear of Hurricane Jose, a Category 4 storm with 150 mph winds that could punish some places all over again this weekend.

Some islands, though, received a last-minute reprieve as a hurricane warning for Barbuda and Anguilla was downgraded to a tropical storm. Both islands were devastated by Irma.

Many residents and tourists were left reeling after Irma ravaged some of the world’s most exclusive tropical playgrounds, known for their turquoise waters and lush green vegetation. Among them: St. Martin, St. Barts, St. Thomas, Barbuda and Anguilla.

French authorities said Saturday that some 1,105 workers are now deployed St. Martin and St. Barts to help the islands’ recovery. By Saturday, damage estimated to have already reached the 1.2 billion euro ($1.44 billion) mark — pockmarking the islands that have become famous as lush playgrounds for the rich and famous.

It’s still not known US President Donald Trump’s luxury property on St. Martin has been damaged by the storm.

Jalon Shortte said riding out Irma in his top-floor apartment on Tortola, in the British Virgin Islands, was the scariest thing he has ever been through.

The air pressure hurt his ears, trees fell on his roof, windows blew out and a door came off, he wrote on Facebook. The storm even took paint off the walls, he said.

His Facebook page was filled with images he took from around Tortola of sunken yachts, crushed vehicles and mounds of debris. He said looting was rampant.

Amid the devastation, Shortte worked to bring a water desalination plant online.

“We have to stick together and rebuild,” he said.