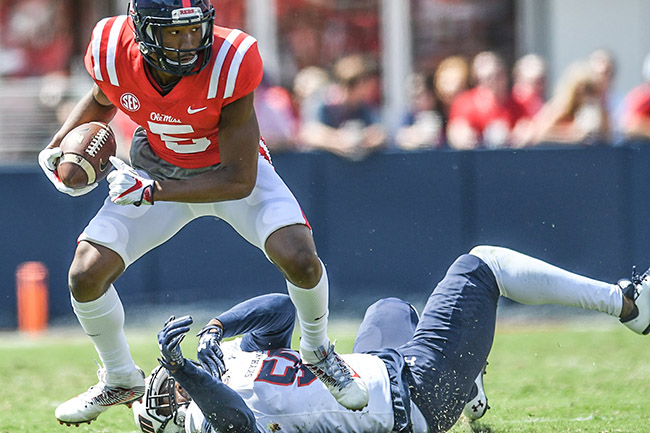 The Ole Miss Rebels defeated UT-Martin 45-23 at Vaught-Hemingway Stadium on Saturday afternoon, despite a less-than-impressive start.

In what many expected not to be a competitive matchup, UT-Martin (1-1) stunned Ole Miss (2-0) early, taking a lead and flexing their muscles against a Rebel defense that was unable to stop the Skyhawks’ run game.

UT-Martin gouged the Rebel run defense for 144 yards in the first half, including 47 yards on the first possession that ended with quarterback Troy Cook scoring on a two-yard rush. The Skyhawks tacked on a field for the 9-0 lead late in the first quarter.

Ole Miss responded when the Shea Patterson-to-A.J. Brown connection picked up where it left off against South Alabama last week. Patterson hit Brown for 58 yards — his first of two touchdown catches — to cut into UT-Martin’s lead.

After a Marquez Grayson two-yard touchdown run, Ole Miss responded with 10 unanswered points, including Brown’s second touchdown pass, for their first lead of the game. A 17-16 lead at halftime.

The second half was a different story as the Rebels scored 21 unanswered points to maintain a comfortable lead the remainder of the game.

It was a record-setting game day for Patterson. He finished 21-of-31 for 489 yards, five touchdowns and one pick. The passing yards set a new single-game school record, surpassing Chad Kelly’s 465 yards against Auburn last season.

“I wasn’t very happy with our energy in the first half,” said Ole Miss interim coach Matt Luke. “I thought our third quarter was better. We put three touchdown drives together and played better on defense. Overall, I just thought we played a little bit sloppy today. We gotta go back and we got to look at it. Then we got to improve.”

Defensively, Ole Miss buckled down in the second half holding UT-Martin to 127 total yards the final two quarters after giving up 207 in the first half. Javien Hamilton picked up the Rebels’ lone interception on the day.

The Skyhawks got their final touchdown of the game early in the fourth quarter when Ladarius Galloway scored on a four-yard run.