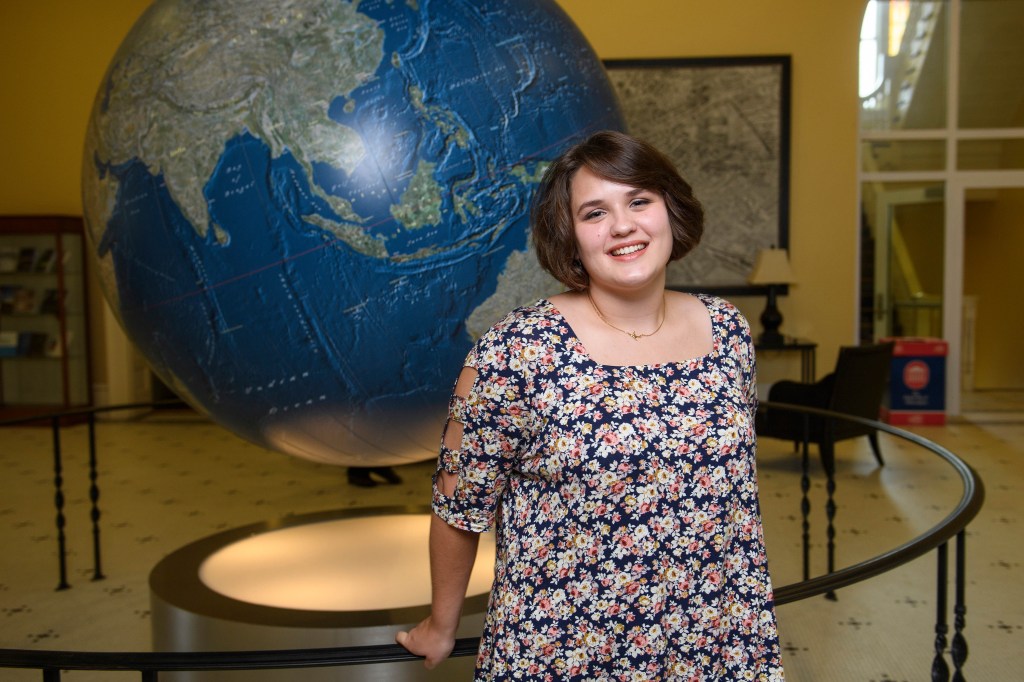 Gwenafaye McCormick of Tuscaloosa, Alabama, will be studying at Waseda University in Tokyo, Japan this year as the inaugural recipient of the Ira Wolf Scholarship. (Photo by Thomas Graning/Ole Miss Communications)

OXFORD, Miss. — A University of Mississippi student is the first to receive a prestigious new scholarship from the U.S.-Japan Bridging Foundation.

Gwenafaye McCormick, a junior international studies and biology major from Tuscaloosa, Alabama, is the inaugural recipient of the Ira Wolf Scholarship. She will study Japanese culture and history at Waseda University in Tokyo for the 2017-18 school year.

“I am utterly humbled and thrilled by this,” said McCormick, a member of the Sally McDonnell Barksdale Honors College and Croft Institute for International Studies. “Although I briefly visited Switzerland, Paris and London in high school, this will be my first time actually studying abroad. I feel like I will learn a lot more than I think I will.”

The scholarship is named after a greatly admired and respected foreign service officer, U.S. trade representative and, most recently, employee of the Pharmaceutical Research and Manufacturers of America trade group in Tokyo. Wolf died in January 2016 after having spent half his adult life in Japan.

“With the support of Ira Wolf’s family and his colleagues in Washington, D.C., and Japan, we created the Ira Wolf Memorial Scholarship Fund to honor his memory,” said Jean M. Falvey, deputy director of the Bridging Foundation.

“Ms. McCormick was selected because she embodies Ira Wolf’s intellect and commitment to strengthening the U.S.-Japan relationship and she’s helping to keep his legacy alive as an emerging global leader. We are very happy to help support her and her dreams.”

Kaoru Ochiai, instructional assistant professor of Japanese in the Croft Institute and UM Department of Modern Languages, has high expectations for her student.

“This study abroad experience will help her to improve Japanese language proficiency and grow her interests in researching the field that she has chosen,” Ochiai said. “She will take all the opportunities to meet Japanese people to become friends and to learn about Japanese culture, which will grow her as a person.”

McCormick became interested in learning Japanese after taking a course in high school. That initial exposure led her to pursue a degree in the language, which ultimately led to her coming to UM.

“Upon visiting campus, I fell in love with Ole Miss and the Croft Institute,” McCormick said. “I’m very interested in environmental studies and conservation, as well as Japanese.

“My plans are to combine my interests into a career which makes a meaningful contribution to the international community.”

Ochaia described McCormick as “warm-hearted” and a person who can anticipate the needs of others.

“I appreciate her supports to Japanese exchange students,” she said. “She volunteered to do many things, such as helping them with English, taking them to grocery shopping and teaching them about American college life. She helped them settle into a new life in Oxford and made their lives comfortable.”

Wolf was deeply committed to strengthening ties between the U.S. and Japan through his professional work and volunteerism, Falvey said.

“He was passionate about educating young adults on all things Japanese,” she said. “As a member of the Japan-U.S. Friendship Commission, he helped award funds to many organizations involved in educational and cultural activities related to Japan.”

McCormick is the daughter of Paige McCormick, a professor of English literature at the University of Alabama, and Mark McCormick, vice president of academic affairs at Stillman College.

Created in 1998, the U.S.-Japan Bridging Foundation works to strengthen the U.S.-Japan relationship by developing global leaders and cultivating a globally competent talent pipeline of the next generation’s workforce, through study abroad in Japan as “Bridging Scholars.”

In the past 19 years, the nonprofit organization has supported 1,837 U.S. undergraduate students’ cultural and educational exchanges, providing opportunities for a diverse cross-section of young adults to develop global leadership and workforce skills that will deepen their understanding of Japan and strengthen the U.S.-Japan relationship.