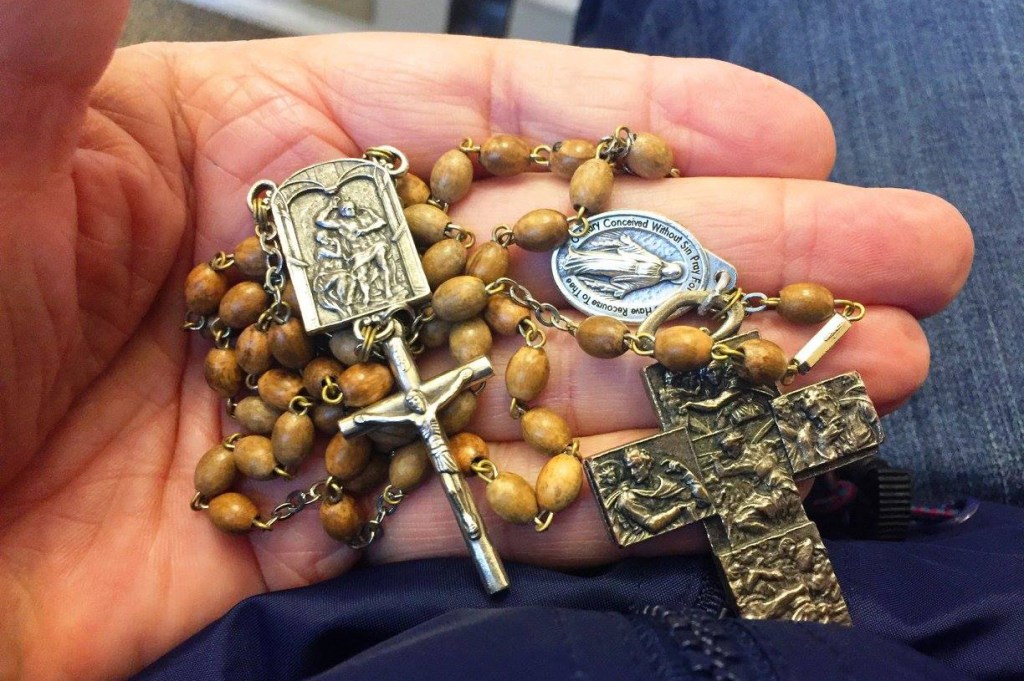 “But know this, that if the master of the house had known in what hour the thief was coming, he would have watched, and not allowed his house to be broken into.” Luke 12:39

On Monday, Sept. 4, my son Stephen and his wife Kristie arrived in St. Thomas to celebrate their 15th wedding anniversary and for along-delayed and much-needed vacation — one they will never forget! No one, especially the hotel, had any idea that Hurricane Irma was going to be such a bloody hell beast (Cat. 5, 185 mph winds) the largest ever on record for the Islands, and they tried to get out but all flights were full.

Tuesday was beautiful as Irma crept directly at them and was expected to hit St. Thomas around 3 a.m. Wednesday, but was moving slower than forecast and by 11 a.m. the leading edge was hovering over them. There is no good time for something like this, but it was better to face this monster during daylight rather than the wee hours of darkness.

Just before noon Mass, Stephen sent photos and video of the roof being ripped off the building in front of them (the Weather Channel used it), and said the eye was approaching, and they were hunkered down in the bathroom. It was my “read day” but I don’t remember it. Their hotel building captain came by to check on them and reported that much of the island was already without power but the hotel had generators standing by. Then after a few more texts and Facebook posts, I did not hear from him for the next several agonizing hours.

No one knew what was going to happen when this force of nature engulfed St. Thomas, but God has a plan for all us, and I had no doubt that Stephen and Kristie (an ordained minister and pastor) who are prayer warriors and persons of great faith, were exactly where they should be and would be okay.

Few of us receive advanced notice that a calamity is about to strike, like in Luke 12:39, so we could hopefully prepare for it. For Irma, (Harvey, Katrina), warnings and forecasts were predicted far ahead of land fall; however, sometimes nothing can prepare one for the unforeseen devastation wrought by nature or a life health blow; it is how we handle such things and trusting God’s will for us.

“Praying for the desire to do God’s will and praying to know God’s will. And when I know God’s will, praying again for the third time, to follow it. To carry out that will, which is not my own, it is His will. And all this is not easy.” Pope Francis

Finally, at 4:45 p.m. and wearing out the Rosary Stephen brought me from the Vatican a few years ago, he called (Whew!) to say he and Kristie were okay, dry, had intermittent cell service and power but no internet, the worst of Irma had passed, but some water had leaked under the door of their hotel and down the walls as most of the roofs were damaged or had been partially torn off. Thank you, God.

As I send this to the Oxford EAGLE on Wednesday evening (still numb from relief), damage to the island will not be known until daylight Thursday (or days from now) and not all on St. Thomas and in the path of this storm were surrounded by concrete, had back-up generators, food, and potable water. Even with these, this is an immensely dangerous and powerful storm and prayers to all in Irma’s path as this wicked lady takes aim on our shores.

I can calmly endure what life throws at me from V.C. rockets to emergency heart surgery, but to have my son and daughter-in-law who I love beyond words, in the path of immediate danger like this, is a whole another matter! Whew!

It is time now for a sweet, relaxed, and thankful Happy Hour on the patio with that cat. Again, thank you, God. Thank all of you for your prayers. Be safe.

Steve Stricker received his Ph.D. in Counselor Education from Ole Miss and can be reached at sstricke@olemiss.edu.