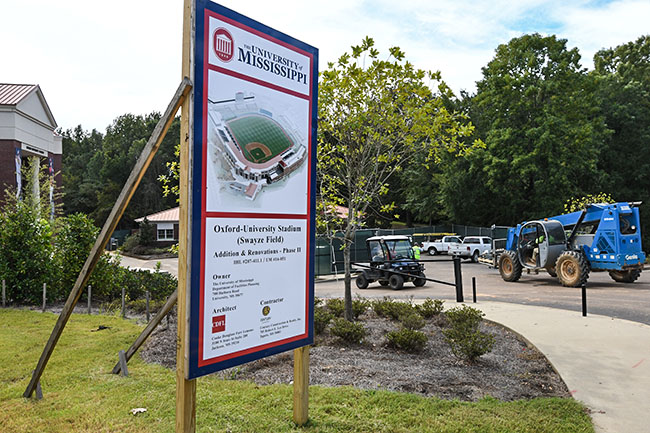 Ole Miss will play its fall baseball scrimmages at Edwin Moak Field at Oxford Middle School due to construction at Oxford-University Stadium.

Ole Miss baseball is going back to school. High school that is.

With construction underway for the $20-million renovations at Oxford-University Stadium the baseball team is in need of a new location to play their scrimmages.

The Rebels found a temporary home at Edwin Moak Field.

Ole Miss will still practice and hit in the cages at O-U Stadium but the field is unplayable due to dugout and lower-level seating construction taking place.

That is where Oxford head coach Chris Baughman and the Chargers stepped in.

“In terms of letting them use (the field), it was a no-brainer to me,” Baughman said. “Our kids, they can go out there and watch their guys scrimmage.”

Baughman sat down with Ole Miss head coach Mike Bianco and worked out dates Oxford’s field would be available and found little conflict.

Oxford has four more football home games during the regular season and on those Fridays Ole Miss will not scrimmage.

Bobby Holcomb Field is adjacent to the Chargers’ baseball field and could create a safety issue with foul balls, as well as parking problems.

There were not any conflicts in terms of Oxford players having to used the field the same time the Rebels needed it. In the fall, high school baseball teams are only allotted 40 minutes from 3:05-3:45 p.m. of practice time during the fall.

This will also give former Oxford Chargers Thomas Dillard, Grae Kessinger and Houston Roth the opportunity play in their old stomping grounds.

As was the case at Swayze Field, the scrimmages will be open to the public.