Wanting to ‘make sure we’ve got the right guys on the field,’ personnel changes could be coming on Ole Miss’ defense 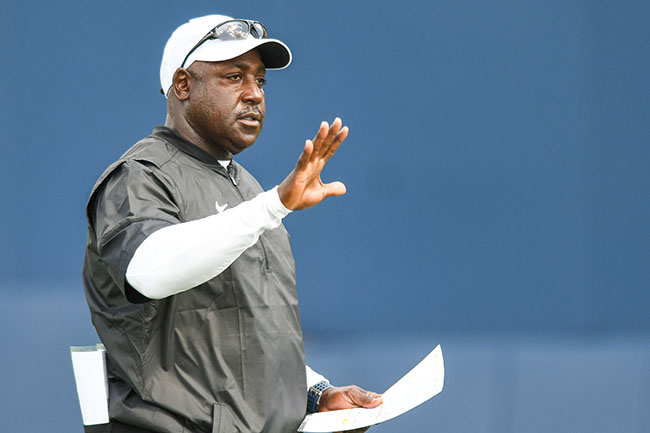 Instead of clearing up the depth chart on the defensive side of the ball, Ole Miss’ first two games have had the opposite effect.

Defensive coordinator Wesley McGriff said he will take a deeper dive into his personnel this week and may shake up the two-deep after a pair of subpar performances against South Alabama and UT Martin. The Rebels’ schedule stiffens considerably over the next month starting with a trip to Cal on Saturday (9:30 p.m., ESPN).

“We signed up for a production-based business,” McGriff said. “You have to go out and produce, and if you don’t, you’re not going to be on the field. We’ll take a hard look at that tonight in our personnel meetings and we’ll make the changes.”

Ole Miss is 40th nationally in pass defense, allowing less than 160 yards a game, but that’s mainly because teams haven’t needed to go to the air often with the Rebels continuing to have issues stopping the run. Ole Miss, which ranked 120th last season in run defense, is 99th against the run after two weeks, allowing more than 194 yards a game on the ground.

Misalignments and mental errors have plagued the Rebels at times, but the biggest problem continues to be missed tackles. Nobody has been immune to the physical and mental breakdowns, said McGriff, whose defense is allowing an SEC-worst 4.8 yards per carry.

“We’ll certainly look at every position because every position, from the d-line to the linebackers to the secondary, all have their hand in the jar in terms of giving up too many yards in the running game,” McGriff said. “It’s not just one segment.”

Ole Miss didn’t make wholesale substitutions as often against UT Martin as it did in the opener with the Rebels unable to distance themselves until opening the third quarter with three straight touchdown drives, but McGriff still got a good look at his reserves as he tries to determine where players’ skills sets are best suited. The Rebels played 11 defensive linemen and seven linebackers, rotated in second-teamers Javien Hamilton and Ken Webster early at cornerback and again mixed Jaylon Jones in at safety.

“We’ve got to pay attention to who we’re asking to do what,” McGriff said. “Make sure we’re not asking a young man to do something he’s incapable of doing. We’re searching for all of that.”

One of the brighter spots for McGriff was the play of middle linebacker Detric Bing-Dukes, who came off the bench to record five tackles, four of them solo, in his first game of the season after serving a one-game suspension for an offseason shoplifting arrest. Bing-Dukes, who started three games last season, will push redshirt freshman Donta Evans for the start this week in practice.

The competition isn’t isolated to the middle of Ole Miss’ defense. McGriff said every position is being closely evaluated as the Rebels’ first-year coordinator still tries to nail down his 11 best defenders, which may or may not already be at the top of the depth chart.

“The last piece to the puzzle is let’s make sure we’ve got the right guys on the field,” McGriff said. “Don’t be afraid to shift the depth chart.

“Some of them may be painful, but we’ll make the necessary changes and we’ll move forward.”