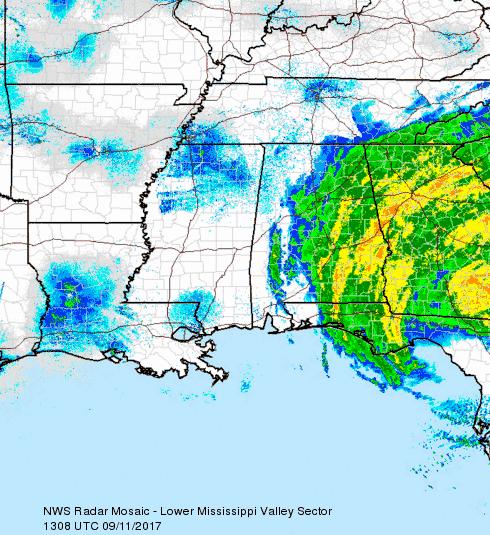 As remnants of what was Hurricane Irma make their way northwest, the LOU community is expected to get some rain and gusty winds.

Oxford Emergency Management Coordinator Jimmy Allgood said the tropical depression should make its way into Oxford this evening bring 1 to 2 inches of rain and wind gusts of about 30 to 40 mph.

The good news, he said, severe weather is not in the forecast.

“We should get any tornadoes or severe thunderstorms,” he said. “It’s mostly a rain event with some gusty winds.”

Allgood said residents should make sure garbage cans and outdoor furniture are secured since the gusts can reach 40 mph.

“If we get the heavier side of the predicted rainfall and some pretty good gusts, our biggest concern will be trees falling,” he said this morning.

“The rain should clear up by Wednesday night,” Allgood said.

The highs for Tuesday and Wednesday are in the late 60s with lows in the mid-50s. Thursday is forecasted to be sunny and clear with a high of 82.

Crews with North East Mississippi Electric Power Association were expected to leave out from Oxford Tuesday morning to drive to Florida to help restore power to those affected by Hurricane Irma when she slammed into south Florida Sunday morning.

NEMEPA General Manager Keith Hayward said the 14 workers planning to go to Florida are being held in Oxford until sometime Wednesday due to the possibility of downed power lines in Lafayette County tonight and Tuesday.

Hayward said his crews were assigned to go to Lake Placid; however, he said that could change because of the delay.

“There’s nowhere to stop from here to there so it’s going to be a hard ride for them once they do leave,” Hayward said.