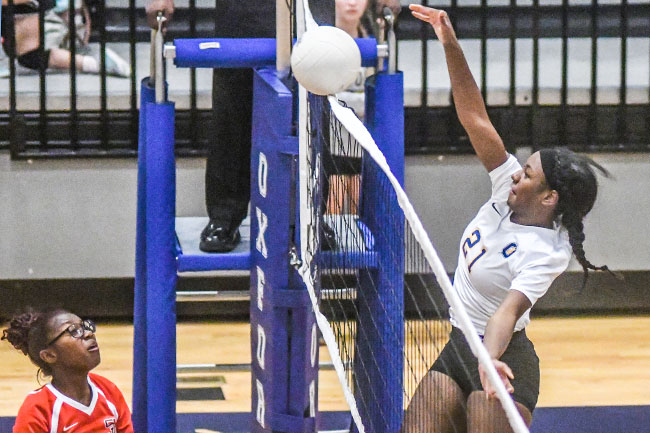 It is early September, but Oxford has already played their final home match of the season.

It is the final match of the season for the Chargers in their home gym as the renovations/repairs to the basketball court will be getting underway. Oxford hosts Senatobia on Sept. 25 and it will be played at the middle school gym.

As for their match against the Tigers, it was pretty much business as usual for Oxford (10-3, 2-0) through the first two sets.

“Our hitting was pretty good tonight, overall,” Oxford head coach Kacie Hengler said. “We didn’t have much of a block against us. I understand to some degree you’re not going to have the rallies you’d get with a better team. They still played pretty well the first couple sets.”

With the match seemingly well in hand, Oxford stumbled in the third set and allowed South Panola to have some life. The scored was tied several times in the early going with the Tigers (3-7, 0-2) even taking a 11-10 lead over the Chargers.

Oxford managed to pull away with a 15-10 lead and held on to clinch the match, but did not finish the way Hengler would have liked them to.

“They just played lazy,” Hengler said of her team’s play in the third set. “That’s probably the one thing that will drive any coach crazy is when the team just doesn’t put in the effort.”

Grace Joyce finished with a match-high 11 kills along with two digs. Senior Jordan Freeze had four kills as did juniors Mia Baskin and Lauren Sink. Kate Sudduth finished with a team-high three digs.

With Tuesday being the final night on their home court, Oxford recognized their four seniors before the match.

Lily Mitchell, along with Joyce, Freeze and Sudduth were honored by their families, teammates and coaches for their contributions the past four seasons.

“I love every single one of them,” Hengler said. “All four of them have amazing personalities. It’s really fun to coach. They’ve made this first season really enjoyable. They set the bar really high, because they’ve left big shoes to fill. Not just players but as character.”

Oxford will participate in the Tupelo Volleyfest at Tupelo High School this weekend.