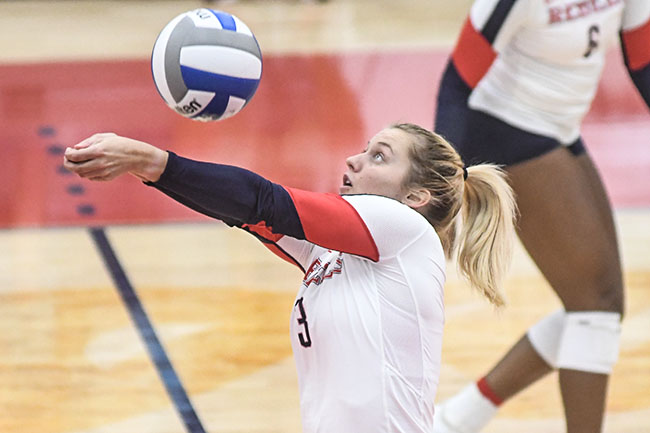 Ole Miss' Jordan pate (3) returns against Chattanooga in volleyball action at the Gillom Center in Oxford, Miss. on Saturday, August 26, 2017.

With Hurricane Irma having gone through Orlando earlier this week, the Ole Miss volleyball team changed their plans and will now host South Alabama for a pair of matches this weekend Friday and Saturday at the Gillom Sports Center.

The Jaguars were scheduled to play in Florida International’s tournament in Miami, which got canceled, leaving them with an open weekend.

Ole Miss and South Alabama will play the first match Friday at 6:30 p.m., and the second one Saturday at 1:30 p.m.

Quick Hits…
• The Rebels shut out Northern Colorado 3-0 on the road Tuesday night behind a combined 23 kills from senior outside hitter Lexi Thompson and sophomore right side Emily Stroup. Thompson finished with 12 kills and hit .267 for the night, while Stroup was solid from the right side with 11 kills on a .429 percentage.
• It marked the first ever meeting between the two schools.
• Ole Miss improved to 8-3 on the year and has won four in a row.
• Senior outside hitter Kate Gibson returned to her home state of Colorado for the first time as a Rebel. The Sedalia native chipped in 8 kills and a team-high 11 digs.
• Junior middle blocker Delaney Gallagher got her first start in a Rebel uniform and finished the match with 6 kills and hit .286. She hit the nail on the coffin, sending one back down the middle on match point to hand the Rebels the win. Gallagher also added 2 blocks.
• Sophomore setter Jordan Fate passed out a career-high 23 assists in the win over Northern Colorado.
• The Rebels posted their fifth shutout of the year in 11 matches compared to just five total shutouts last year.
• Thompson now has 1,182 kills and 1,037 digs. She needs 18 kills to set the career record in the rally era.

Scouting South Alabama…
South Alabama comes into the weekend at 4-4. They are coming off a 3-0 win over Clemson at the War Eagle Invitational last weekend. Pior to that, the Jaguars lost to host Auburn 3-0. The Jaguars are led by sophomore outside hitter Iva Durdanovic, who averages 2.79 kills per set, and sophomore middle blocker Kelley Hartman, who averages 1.48 blocks per set and hits at a .275 clip.

Rebels vs. Jaguars…
Ole Miss leads the all-time series with South Alabama 6-2.  This will be the first meeting between the two teams since 2005, a 3-1 win for the Jaguars at the Jaguar Challenge in Mobile, Alabama.

Thompson closing in on kills record…
This weekend could be big for senior outside hitter Lexi Thompson. With 1,182 kills, Thompson needs just 18 to set the record in the rally scoring era.