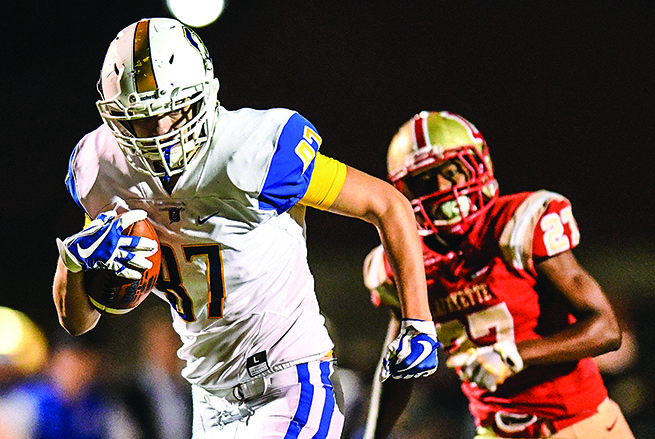 An old rivalry is dusting itself off on Friday night.

Oxford hosts Pontotoc in what has become one of the more anticipated early-matchups this season (7 p.m., 95.5 FM).

It will be the first time the two teams have met since 2004 when they were both in Region 2-4A. Oxford won at home 37-0.  To put it in even more perspective, the last time Oxford played Pontotoc, current head coach Chris Cutcliffe was the Chargers’ quarterback.

The Warriors enter this week undefeated at 4-0, ranked No. 2 in Class 4A and No. 11 overall in this week’s AP poll.

This is a game that was not originally scheduled to take place.

The Chargers (3-1) were scheduled to have their traditional off-week before getting into region play next week against Southaven. Playing in this season’s Red Carpet Bowl against Vicksburg took a home game off Oxford’s schedule, so they added one with Pontotoc.

“It’s a great opponent in Pontotoc,” Cutcliffe said. “We’re excited to have a game and not be off. I know (Pontotoc head) coach (Jeff) Carter pretty well and we talked and we both had the opening this date and decided to go for it. …I think it’s good for both communities.”

Oxford is coming off their 41-17 win over Lafayette in the annual Crosstown Classic, avenging last year’s loss and taking a lot of momentum into this Friday’s game.

Running back Hiram Wadlington recording his fourth-straight 100-yard rushing game and looks to be getting the Chargers’ run game in prime shape ahead of their first dip into Region 1-6A play next week.

Junior John Reece McClure and sophomore John Mark Meagher have also turned into a solid tandem under center for Cutcliffe. In what started out as a potential quarterback battle has turned into a potent combination.

“They’re both such great kids. Unselfish kids,” Cutcliffe said of his quarterbacks. “I tell them we don’t have a set plan necessarily going in. It’s going to be a flow of the game type of deal. We’re just going to kind of be unselfish and support each other. Be great when it’s your turn.”

Friday night marks the first time Pontotoc has played a Class 6A team.

The run game is paced by junior Immanuel Vance and his 699 yards on 67 carries. Vance has rush for over 100 yards in three of their first four games and recorded seven touchdowns.

Defensively, the Warriors are stifling opponents and holding them to 14.5 points per game. It could pose a problem for the Oxford offense that is averaging 26.2 points a game. Pontotoc’s defense has also picked off 10 passes this seasons.

“They have a really good program. Those kids know how to win,” Cutcliffe said. “They don’t beat themselves. They don’t make mistakes. They’ve forced a ton of turnovers. They have playmakers.”