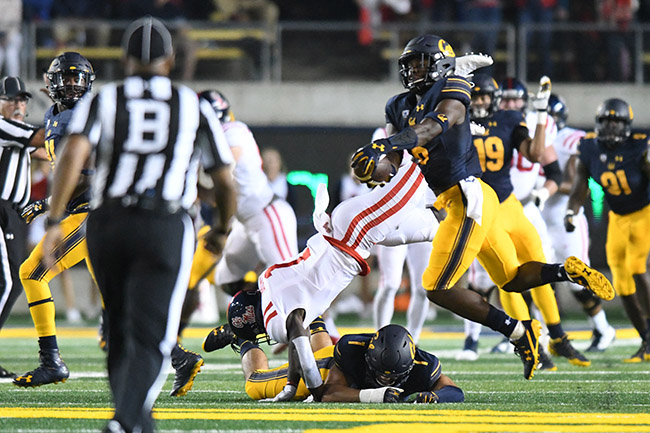 BERKELEY, Calif. — Ole Miss’ defense kept the Rebels close. It was their normally explosive offense that never really gave them a chance in their first game against a Power Five opponent this season.

Two of the nation’s top 55 scoring offenses met in California Memorial Stadium late Saturday night, but the Rebels bogged down with a number of mistakes and injuries in a 27-16 loss to Cal. Ole Miss came in with the nation’s top passing offense and 16th in scoring but went nearly 43 minutes of game time without scoring as the Rebels were blanked 20-0 in the second half — the first time they’ve been shut out in a half since last year’s Egg Bowl.

“From an execution standpoint, we’ve got a lot to get cleaned up,” interim coach Matt Luke said.

Quarterback Shea Patterson threw touchdowns of 71 and 72 yards and had 212 yards passing early in the second quarter but threw for just 151 yards the rest of the way and tossed a season-high three interceptions, including one that was returned 32 yards for a touchdown by Cameron Goode late in the fourth quarter to ice the victory for Cal, which was held to a touchdown less than its season average.

“This one kind of stings a little bit because we know we’re a better football team than we showed offensively tonight,” Patterson said.

Patterson lost his top target, leading receiver A.J. Brown, to a leg injury in the first half while center Sean Rawlings also left with a sprained ankle in the first half and didn’t return, forcing guard Javon Patterson to move to center and inserting Jordan Sims, who’s been hobbled by an ankle injury, at guard. Facing a reshuffled offensive line and an Ole Miss running game that didn’t provide much help (53 yards on 29 carries), Cal got after Patterson for five sacks and held the Rebels to 131 yards and 3.2 yards a play in the second half as the Bears erased a 16-7 halftime deficit.

“That’s part of the game,” offensive coordinator Phil Longo said. “You have to overcome those obstacles and handle them during the course of the game and not allow it to disrupt what you’re trying to do offensively.”

Said Luke, “No excuses. You’ve got to step in and get your job done. Injuries are a part of football.”

Predictable downs and distances also didn’t help as a season-high 16 penalties, including a number of flags for false starts, holds and delays of game, often kept Ole Miss’ offense behind the chains. The Bears’ speed on defense was a step up from what the Rebels saw from South Alabama and Tennessee Martin the first two weeks, but Luke said the offense was its own worst enemy throughout the night.

“In the end, it was just execution,” Luke said. “We can’t have penalties and be behind the chains the way we were and you can’t turn the football over, especially on the road against a really good Pac-12 football team.”

Brown and Rawlings weren’t the only impactful injuries for Ole Miss.

Kicker Gary Wunderlich pulled his hamstring on the extra point following Ole Miss’ first touchdown midway through the first quarter. Wunderlich got the Rebels on the board with a 21-yard field goal on their first possession but missed the extra point following Ole Miss’ second touchdown — his second missed PAT this season — before his night was done.

Freshman Luke Logan came on to attempt a 48-yard field goal with Cal leading 17-16 early in the fourth quarter, but his kick missed low and to the left by a wide margin. Luke said after the game he wasn’t sure about the severity of the injuries to Wunderlich, Rawlings or Brown, who came in with 389 receiving yards and four touchdowns but didn’t record a catch.

Ole Miss falls at Cal for first loss of…