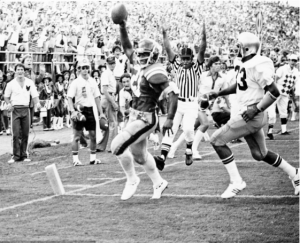 It was the best game I ever saw, except for the fact that I wasn’t there.

The radio was our eyes in the days when we couldn’t get to the Ole Miss games in person. I didn’t miss many and that was an accomplishment for an 11-year-old, considering most home Rebel games were played in Jackson and I lived in Oxford and my parents didn’t always go.

My friends and I had a system for trading out rides to the games and sometimes it didn’t even involve parents. I remember, for instance, riding home after Ole Miss beat Memphis in Jackson with the late George Street, who loved the Rebels like few I have ever known.

He gave a speech as the car bumpity-bumped up Interstate 55 in the dark of night while we listened intently with half-cracked eyes about the history of the Ole Miss and its red and blue colors, proclaiming proudly that no school in the nation had colors like our colors.

“Yes, sir,” we said, effectively giving a lifetime pledge of allegiance in response.

The Notre Dame game wasn’t so accessible. The Fighting Irish were three-touchdown favorites, but they were Notre Dame, and tickets at the sold out Veterans Memorial Stadium in Jackson were hard to come by, meaning invitations for 11-year-old tagalongs dried up.

My friends and I hunkered down in our Oxford homes with no other option since the game wasn’t televised, viewing small radios turned to max volume from left to right, listening to Rebel play-by-play announcing Charlie McAlexander deliver the gripping action.

It was a sunny, hot afternoon that September 17, 1977 with the humidity turned up a notch but Notre Dame took a 13-10 lead with just 4:53 left in the game despite the conditions. The Fighting Irish seemed to have victory in hand and I remember staring at the radio, hoping for a miracle that seemed impossible.

The front door of our home on University Avenue was open and nary a car moved on the street as if the power of possibility kept the city paralyzed.

Ellis was our hero despite his third-string status – I still feel that way about the recent M-Club president, who is a fantastic gent – and I remember my telephone ringing with a call from another friend who was hunkered by a radio.

Ellis got the Rebels moving and adrenaline rising.

Little-used tight end L.Q. Smith of Oxford checked into the game and Ellis found him across the middle. Smith made it all the way to the Notre Dame 22.

The fact that Smith, from Oxford, made the play that got Ole Miss back in the game made it almost more than we could stand.

The Rebels scored and soon added a Hoppy Langley field goal while the Irish melted in the final minutes, fumbling once and throwing an interception on another possession as the game clock expired.

When McAlexander told us the game had ended, and that Ole Miss had beaten highly-ranked Notre Dame, we didn’t know what to do but run outside.

Cars began to move on the street. They honked and friends who had gathered with me along University Avenue jumped around and waved back like we had won the game ourselves.

At school that Monday we all swore we were there, and in a way we were. We had sweated it out just like the fortunate 48,000 who made it to Veterans Memorial Stadium. The giveaway, however, was that those who did make it to Jackson had sunburned faces, while our pale cheeks told a different story.

Yet let the record show that I have seen some great Rebel wins in my lifetime, but none better than that one 40 years ago.

Playing the waiting game with the NCAA