Ole Miss falls at Cal for first loss of the season 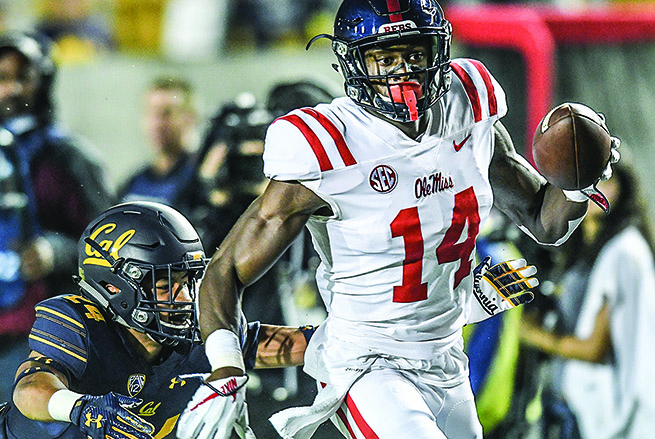 It will not be one to remember.

The Rebels (2-1) played their first Pac-12 team in program history and fell to the California Golden Bears 27-16 at California Memorial Stadium in Berkeley, California on Saturday night.

To make matters worse, the injuries piled up during the course of the game, removing key players from the Rebels’ rotation.

A.J. Brown, Gary Wunderlich and Sean Rawlings all missed large portions of the game due to injury. Brown and Rawlings were the most significant losses with the offensive line out of sorts once their starting center left the game.

Quarterback Shea Patterson completed 26-of-44 passes for 363 yards and two touchdowns. He also threw three interceptions, the most in a game during his young career.

Before exiting the game after hurting his hamstring during a missed extra point attempt in the second quarter, Wunderlich put Ole Miss on the board first with a 21-yard field goal. The other scores came from touchdown catches by DeMarkus Lodge and D.K. Metcalf. Each went for 72 and 71 yards, respectively.

Lodge’s score came midway through the first quarter to put the Rebels back in front with a 10-7 score. Metcalf’s was less than two minutes into the second quarter, giving the Rebels a 16-7 edge after the missed extra point.

That would be all the points Ole Miss would muster.

California (3-0) outscored the Rebels 20-0 in the second half with two field goals and a touchdown. The final blow came off a 32-yard pick-six by California’s Cameron Goode when he snagged a pass from Patterson for the winning margin with three minutes left in the game.

Metcalf finished with a game-high 125 yards on three catches while Lodge racked up 100 yards on four catches. Van Jefferson also had 94 yards on 10 catches.

Once again the Ole Miss run game was non-existent, going for 53 yards on 29 carries. Jordan Wilkins finished with 38 yards on 11 carries and D’Vaughn Pennamon had 23 yards on five carries.

The Rebels now enter their bye week before traveling to No. 1 Alabama to open up Southeastern Conference play in two weeks.