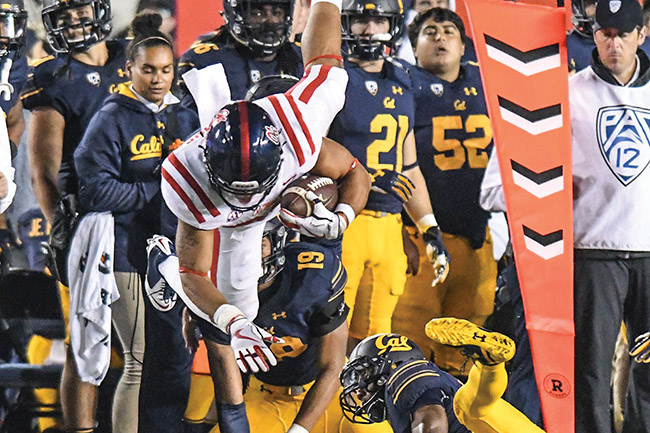 BERKELEY, Calif. — Ole Miss dealt with an offseason of adversity. Now the Rebels are dealing with their first dose of it during the season.

The Rebels traveled to the West Coast for their late-night tussle with Cal on Saturday and are returning to Oxford with their first of the season. They’re also making the trip back with more questions than answers after a 27-16 setback that got downright ugly at times.

Shea Patterson and his receivers produced their usual big plays, but that was expected given Ole Miss’ talent going up against a Cal team that came into the night with the nation’s ninth-worst pass defense. It was the running game that again was non-existent.

Sure, not having leading receiver A.J. Brown in the second half hurt, but so did the predictability that looks eerily similar to last season. The Rebels began the night 117th nationally in rushing and did nothing to improve on that, averaging a measly 1.8 yards on their 29 carries and allowing the Bears’ front seven to pin its ears back and get after Patterson, who threw three interceptions, was sacked five times and chased around the turf inside California Memorial Stadium too many other times to count.

It’s hard to lay much blame at the feet of the defense on a night when Ole Miss allowed the Bears to reach the end zone just twice, but gaping running lanes and missed tackles were still a problem at times. Even with a shorthanded backfield after Tre Watson suffered a season-ending injury, Cal racked up 181 yards on the ground and averaged more than 4 yards a carry against the nation’s 99th-ranked run defense, which allowed the Bears to shorten the game and limit the Rebels’ offense to six second-half possessions.

Questions of depth popped up with injuries to three starters in leading receiver A.J. Brown (leg), center Sean Rawlings (ankle) and kicker Gary Wunderlich (hamstring). With DK Metcalf, DaMarkus Lodge, Van Jefferson and others, the Rebels are deep enough out wide to get by should Brown miss any significant time, but finding suitable replacements for a three-year starter up front and an All-SEC kicker will be a chore if Ole Miss has to do it.

Ole Miss is already down a body with Rawlings’ backup, Eli Johnson, out for the season with a torn ACL, leaving guard Javon Patterson as the acting center. Fellow guard Jordan Sims could also play the position while interim coach Matt Luke didn’t rule out pulling redshirts off freshmen if the situation becomes dire, but the offensive line was a mess against Cal once Rawlings’ injury forced some linemen out of the normal spots.

Many of the Rebels’ whopping 16 penalties came in the form of holds, false starts and delays of games. Freshman Luke Logan’s not-even-close miss of a 48-yard field-goal attempt early in the fourth quarter showed how valuable Wunderlich is when he’s healthy.

There’s not a lot of time for the Rebels to find answers.

Ole Miss will get a week off to do as much healing as possible before the schedule ramps up a couple notches with No. 1 Alabama and No. 15 Auburn next up on the Rebels’ road trip before what may be Derek Mason’s best Vanderbilt team visits Vaught-Hemingway Stadium in mid-October.

Those games start a string of six straight games against Southeastern Conference foes for Ole Miss. If the Rebels’ West Coast trip revealed anything, it’s that the Rebels need to find some answers — and fast — if they want to survive that gauntlet.