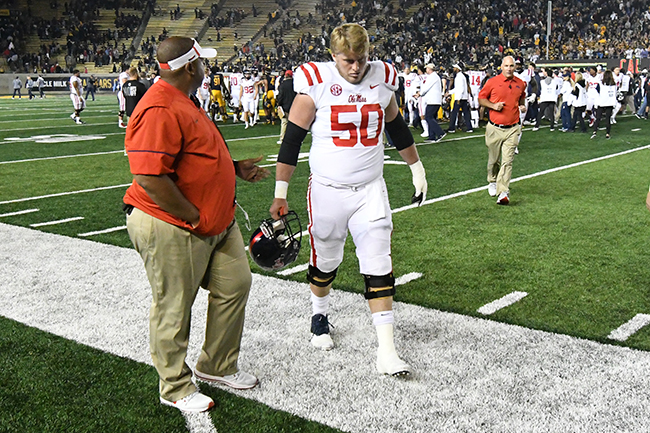 Ole Miss center Sean Rawlings (50), who was injured in the first half against California, walks off the field following a 27-16 loss in Oxford, Miss. on Saturday, September 16, 2017. Injuries, turnovers, and penalties plagues Ole Miss in the first loss of the season.

It turns out Sean Rawlings’ sprained ankle is more severe than originally thought.

Ole Miss’ center will undergo surgery today on his left ankle, which interim coach Matt Luke said was sprained “very, very bad” during the first half of the Rebels’ 27-16 loss at Cal over the weekend. Rawlings left the game in the second quarter to get the ankle taped and never returned.

Luke said there’s a “wound” that needs to heal once the surgery is completed before Rawlings can get back to running on the ankle. It’s too early to know whether Rawlings will be available for the Rebels’ Southeastern Conference opener at No. 1 Alabama on Sept. 30, though the Rebels have an extra week to try to heal up entering an open date.

“He’s probably 50-50 for Alabama if I had to give it my best guess, but I’m not sure about that right now,” Luke said.

The Rebels will wait to see about other injured players, too.

Wideout A.J. Brown strained his MCL in the first half against Cal with Luke estimating the sophomore will be out a week or two. Brown, who didn’t play in the second half, leads the Rebels with 389 receiving yards and is tied for the team lead with four touchdown catches.

“We’ll probably give him the open date to see how much he heals,” Luke said. “I’ll be able next Tuesday to have a better judge on that. I would say that he’s probable, but we’ll have to see next Tuesday.”

Defensive end Victor Evans sprained his MCL against Cal and could be out for a couple of weeks, Luke said. Luke was more optimistic about kicker Gary Wunderlich, who left the game in the first half with a tight hamstring and didn’t return.

“I think with a week off, he should be fine,” Luke said.

Tight end Dawson Knox and guard Jordan Sims got through the game with no issues. Knox made his season debut against Cal after battling a foot injury the first two weeks and played 20 snaps while Sims had been dealing with a sprained ankle that kept him out against UT Martin the previous week.

Receiver Markell Pack may miss a week with an unspecified injury, Luke said.