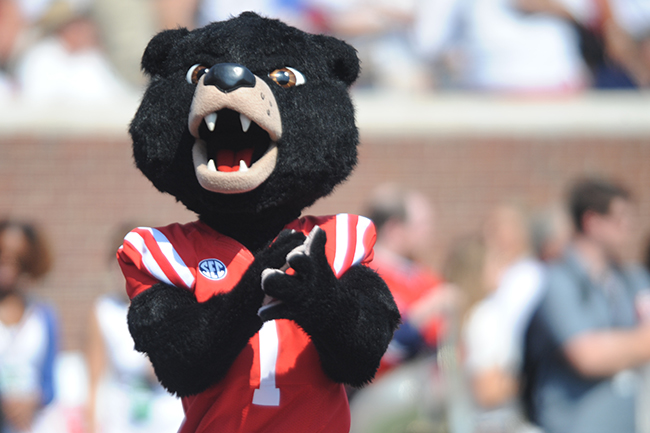 Rebel the bear mascot at Ole Miss vs. Tennessee Martin Skyhawks at Vaught-Hemingway Stadium in Oxford, Miss. on Saturday, September 5, 2015.

Rebel the black bear might be going into hibernation.

The Ole Miss Associated Student Body announced the Landshark Referendum on Monday. The ASB will hold a student vote on September 26 to either keep ‘Rebel’, the current black bear mascot, or replace it with a Landshark mascot.

“The Landshark as we know it today has its origins in football, but has since expanded to symbolize Ole Miss’ fighting spirit and athletic prowess,” the statement released by ASB President Dion Kevin III read. “After a decade of success under the Landshark, it’s time to make it a lasting part of our history.”

The mascot debate first started nearly 15 years ago when the Colonel Reb mascot was taken off the field during the 2002-2003 school year.

Rebel was introduced as the new on-field mascot when it made its game debut against Kentucky at Oxford-University Stadium on Saturday, April 16, 2011. The bear has been seen at football, basketball and baseball games ever since its introduction.

The Landshark hand gesture became synonymous with Ole Miss athletics after former linebacker Tony Fein put his hand to his helmet during the 2008 season.

“On September 26th, we will all have the chance to leave a legacy of unity and excitement in a referendum vote in this year’s Fall Election,” the statement continued.”