Ole Miss focuses on cleaning up its game during bye week 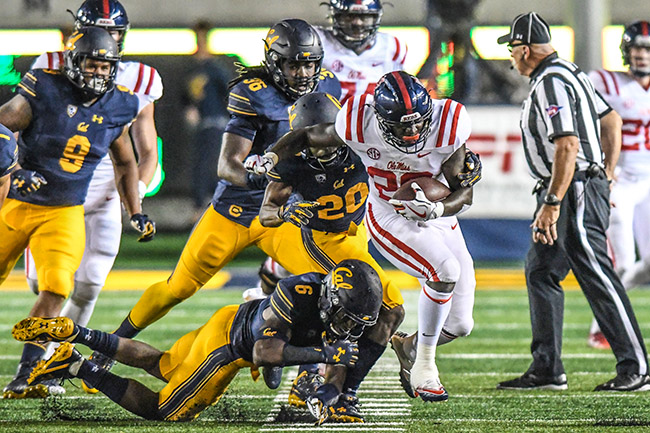 An official prepares to throw a penalty flag as Ole Miss running back D'Vaughn Pennamon (28) rushes for an apparent 13 yards against California's Jaylinn Hawkins (6), Josh Drayden (20), and Alex Funches (36) at California Memorial Stadium in Berkeley, California on Saturday, September 16, 2017. Ole Miss offensive lineman Daronte Bouldin was called for holding on the play.

Ole Miss gets a week off before its upcoming stretch of Southeastern Conference games.

The Rebels will use the majority of it to work on themselves.

Ole Miss enters its open date fresh off its first loss of the season at Cal, a setback that got ugly at times with the Rebels as much a nuisance to themselves as the opposition. Ole Miss’ defense held the Bears to two offensive touchdowns, but the Rebels were held to their lowest point total since scoring just 10 points against Florida in 2015 with three interceptions from Shea Patterson and the majority of a whopping 16 penalties hindering the Rebels’ efforts.

“I think if you take away the turnovers and the penalties, I really think you put yourself in a position to win that football game,” interim coach Matt Luke said. “The good news is the mistakes are correctable. We’re going to use that open date to get healthy and to get ourselves fixed.”

Luke said kicker Gary Wunderlich should be available for the Rebels’ trip to No. 1 Alabama on Sept. 30 after the senior missed the second half against Cal with a tight hamstring, but the statuses of two other injured starters are still up in the air. Coaches will wait to see how center Sean Rawlings (ankle sprain) and leading receiver A.J. Brown (strained MCL) progress this week after also sitting the second half of last week’s game, though Rawlings is the more likely of the two to sit against Alabama after having surgery Monday.

The offensive line was discombobulated without Rawlings, giving up five sacks once the junior left in the second quarter and committing a number of holding and false start penalties that had the offense starting behind the chains on numerous possessions. Luke said breakdowns in communication weren’t the issue since the line used a silent snap count during its first road game and didn’t make any other excuses.

“I just think that’s stuff we’ve got to get corrected,” Luke said. “There shouldn’t be communication with the silent cadence. We’ve just got to get it cleaned up moving forward and we will.”

Offensive coordinator Phil Longo said routinely playing behind the chains affected the Rebels’ tempo, something Ole Miss will need to ramp up in an attempt to neutralize the speedy defenses it will see in its next three games against the Crimson Tide, Auburn and Vanderbilt, each of which is in the top 40 nationally in total defense.

“I think as we play cleaner football on offense — and we will — we’ll be able to get back to the tempo that we want and expect in a game,” Longo said.

Defensively, coordinator Wesley McGriff said the film showed his unit’s tackling was better against Cal than it was the first two games while he was also pleased with the two turnovers the defense created, but he’ll continue to evaluate the personnel to make sure he’s got the right players in the right spots.

It’s all part of an inner focus for Ole Miss before moving on to the rest of the teams on its schedule.

“I think the open date is coming at a good time,” Luke said. “You kind of look at the first quarter of your season, which is now over, and you focus on what we’ve got to get better at and we go get better at it.”