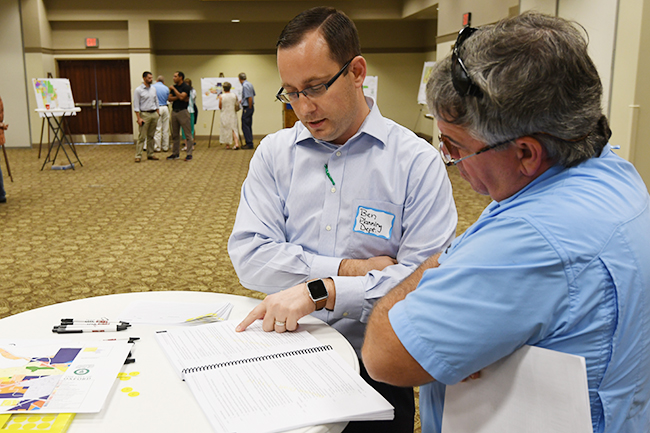 In July, Oxonians were invited to review the proposed new Zoning Code and Map during several public hearings or at City Hall where the public made several suggested changes.

Over the summer, city planners and the Oxford Board of Aldermen reviewed the more than 100 comments and suggestions and made several changes to the code and map.

“Planning staff collected each comment and request for modifications and prepared a response to each for consideration,” said City Planner Judy Daniel. “In late August, the staff met with the aldermen in three work sessions and discussed potential modifications to the Code and Map based on all input received.”

Now the public is once again invited to read the Zoning Code and Map drafts after the changes were made at upcoming public hearings or online on the city’s website, www.oxfordms.net.

“After all these discussions were completed, the staff made all final adjustments, substantive and technical, to the code and map,” Daniel said. “These, and accompanying explanatory documents, are now posted on the website.”

The new overlay was added after Woodlawn residents expressed objections after the first round of public hearings to a small area of land north of Anderson Road at West Oxford Loop to Traditional Neighborhood Business, primarily because of certain uses allowed by special exception that they did not want near their homes, that included drive-thru restaurants, liquor stores and auto shops. The new overlay, called Legacy Traditional Neighborhood Business, will not allow several of the objected uses.

A second public open house is scheduled 4 to 7 p.m. on Thursday at the Oxford Conference Center, where the public can view the final revised versions of the code and map, ask questions and make suggestions and give comments. Those comments, like in July, will be gathered and reviewed by the Planning Department and Board of Aldermen.

A public hearing before the Planning Commission will be at 5 p.m. on Sept. 27. The commission will likely consider the staff presentation, possibly ask staff for further information, and then take up consideration of their recommendation to the mayor and Board of Aldermen at their regular meeting on Oct. 9. The final drafts will be presented to the Board of Aldermen on Oct. 17 during their regular meeting at City Hall.

The updated files may be found on the city’s website at http://www.oxfordms.net/land-development-code-and-zoning-map.