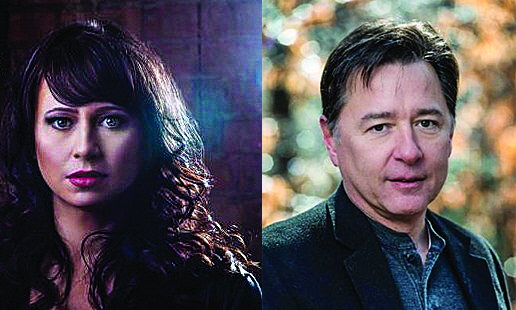 This week The Thacker Mountain Radio Hour presents a “two-fer;” two authors and two musical guests on Thursday, Sept. 21 at 6 pm at Off Square Books. Nationally known author Eileen Myles and debut novelist Daren Wang will be joined by Memphis songwriter, Mark Edgar Stuart and Texas troubadour Crystal Yates. Admission is free and the show is hosted by Jim Dees and the Thacker house band, the Yalobushwhackers.

The live broadcast can be heard locally on WUMS, 92.1 FM. It will be replayed on Mississippi Public Broadcasting on Saturday, Sept. 30 at 7 pm.

Eileen Myles’ latest book is Afterglow (a dog memoir) (Grove Press) in which the author paints a kaleidoscopic portrait of a beloved confidant, a pit bull named Rosie. Starting with Rosie’s death, the book launches a heartfelt and fabulist investigation into the true nature of the bond between pet and pet-owner. Not a typical “dog book,” Myles’ memoir delves into issues of intimacy and spirituality, celebrity and politics, alcoholism and recovery, fathers and family history, as well as grief. Myles is the author of more than twenty books, including Chelsea Girls and Cool for You. Myles lives in Marfa, TX and New York City.

Daren Wang’s debut novel, The Hidden Light of Northern Fires (Thomas Dunne Books) tells a story of redemption amid the Civil War when families – and the country – were torn apart. The book centers around escaped slave Joe Bell and outspoken abolitionist, Mary Willis, who helps him. When Mary finds herself drawn to Bell in forbidden ways, her actions threaten to destroy her family, farm and all that she holds dear. The title refers to a little-discussed chapter from the Civil War, the secession from the Union of a small town in upstate New York.

Songwriter Mark Edgar Stuart has released his second CD, Trinity My Dear (Madjack). A native of Arkansas, he is based in Memphis where for years he was the bass player for the Americana band, the Pawtuckets. The death of his father and his own bout with cancer in 2011 pushed Stuart into songwriting culminating in his first solo release in 2013, Blues for Lou. The album earned “Record of the Year” honors from the Memphis Flyer. Stuart is a sought-after producer and performer in the musically-rich Memphis area.

Texas native Crystal Yates’ most recent release is the EP The Other Side. In January 2014, along with her husband, multi-instrumentalist Will Yates, Yates won the Texaco Country Showdown (and its purse of $100,000) at the Ryman Auditorium in Nashville for her original song, “Goodbye Letter.”  Her sound blends classic Willie/Waylon country with bold vocals from the Whitney Houston school. Her previous EPs include I Believe and Love Wins.

More information — including future shows and guests — is available on the show’s website: http://thackermountain.com/.