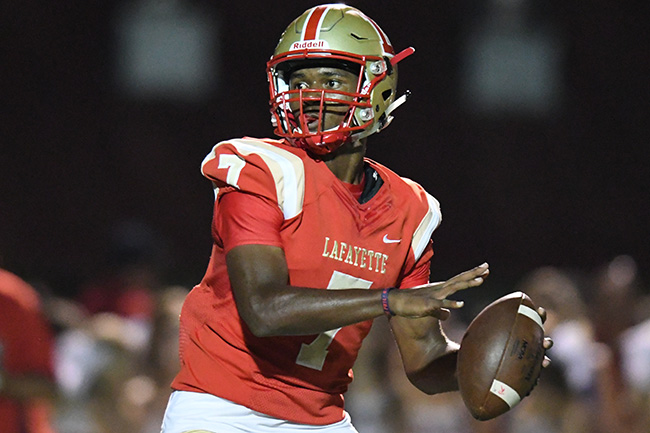 There has been more than just learning how to improve on the football field for Lafayette.

The 0-4 start has been used as a platform to teach there is more than just the results on the football field.

“We talked to the football team about how Friday nights will prepare you for life and adversity,” Lafayette head coach Michael Fair said. “Things that you don’t see coming. Nothing about this season has been easy. I told our guys that, ‘If you’re not learning from where we are as a football team right now you’re missing a great opportunity.”

The life lessons are useful but now that Lafayette’s bye week is behind them it is time to focus on their return to the Class 5A ranks.

It is the first meeting between the two schools in nine seasons. Lafayette defeated the Green Wave 13-0 in the first round of the 4A state playoffs in 2008.

West Point (4-0) comes in fresh off a 47-14 win over Noxubee County last week. Their other wins have come against Columbus, Louisville and Starkville. The average margin of victory is 26.5 points.

“It’s a huge challenge,” Fair said. “This is a really strong team that (West Point) is bringing over here Friday. They’ve got very athletic, very physical football team. They’re hitting on all cylinders right now and it’s going to take a really, really good effort by us to slow those guys down.”

Junior quarterback Jake Chambless leads West Point with 251 yards and one touchdown, completing 12 of 18 passes. Senior Marcus Murphy has also thrown for 160 yards and two touchdowns.
Murphy leads the run game with 517 yards on 64 carries and eight touchdowns. He’s rushed over 100 yards in three of the Green Wave’s first four games. Senior Chris Calvert has rushed for 356 yards on 49 carries and six touchdowns.

Learning to adjust
With news of star athlete Brandon Turnage being out for the rest of the year after suffering a Lisfranc tear in his foot, Lafayette has had to alter their game plan.

The Commodores have been doing so since the first game of the season against Cleveland Central. Turnage went down in the second quarter and did not return. He was in and out the next two games but went under the knife during the week of the Crosstown Classic.

Turnage was a two-way player for Lafayette and without the junior on the field, Lafayette will be hurting on both sides of the ball.

“He’s one of the top corners in the state,” Fair said of Turnage. “From all the offers that are coming in, probably a lot more than in the state. Things change. With him gone we feel like we got guys capable. Just kind of a next-man-up deal.”