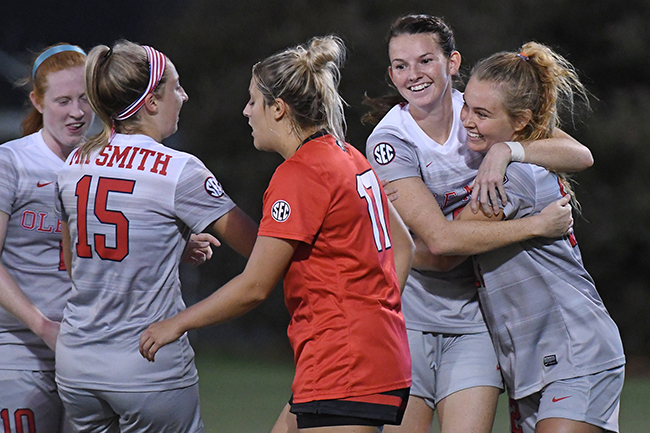 The offensive explosion continued for Ole Miss on Thursday night as the No. 20 Rebels defeated Georgia 4-1 at the Ole Miss Soccer Complex in their Southeastern Conference opener.

It was a margin that could have been much larger as one of the nation’s top offenses had their chances all night.

Foster, the SEC’s leading scorer, got the night started for Ole Miss (8-1-1, 1-1 SEC) with a goal in the fifth minute off an assist from CeCe Kizer. It was Foster’s 10th goal of the season, putting her in solo second for most goals in the country. Wofford’s Hayley Younginer led with 13 heading into Thursday night.

Phillips made it a 2-0 lead for the Rebels with a goal in the 11th minute when Kizer and Mary Kate Smith came up with the assist.

Ole Miss finished the first half with seven shots and three of them on goal.

“I think in soccer you’re never going to score all your opportunities, but we definitely had some chances that were close,” Ole Miss head coach Matt Mott said. “I think we created a lot of chances which was exciting for us.”

“We’re spreading it around,” Mott said of four different players scoring. “We’ve spent a lot of time on our corner (kicks). So if you’re able to get one on a corner, even if it’s on kind of a re-serve it’s nice.”

Ole Miss goalkeeper Marnie Merritt gave up just her third goal of the season when senior midfielder Mariel Guiterrez put Georgia (4-5-1, 0-2) on the board with a goal in the 71st minute. Merritt has played 811 minutes and averaging 0.33 goals allowed per game.

“I think the defense has done a phenomenal job,” Merritt said. “They’ve stepped up when they need to. When I don’t touch a ball three times a game that makes my night super easy. It’s been really awesome to see the defense come together and kind of do what they need to do for us to be successful.”

Ole Miss hits the road on Sunday when they travel to Arkansas. The match is set for 4 p.m. and will air on the SEC Network.