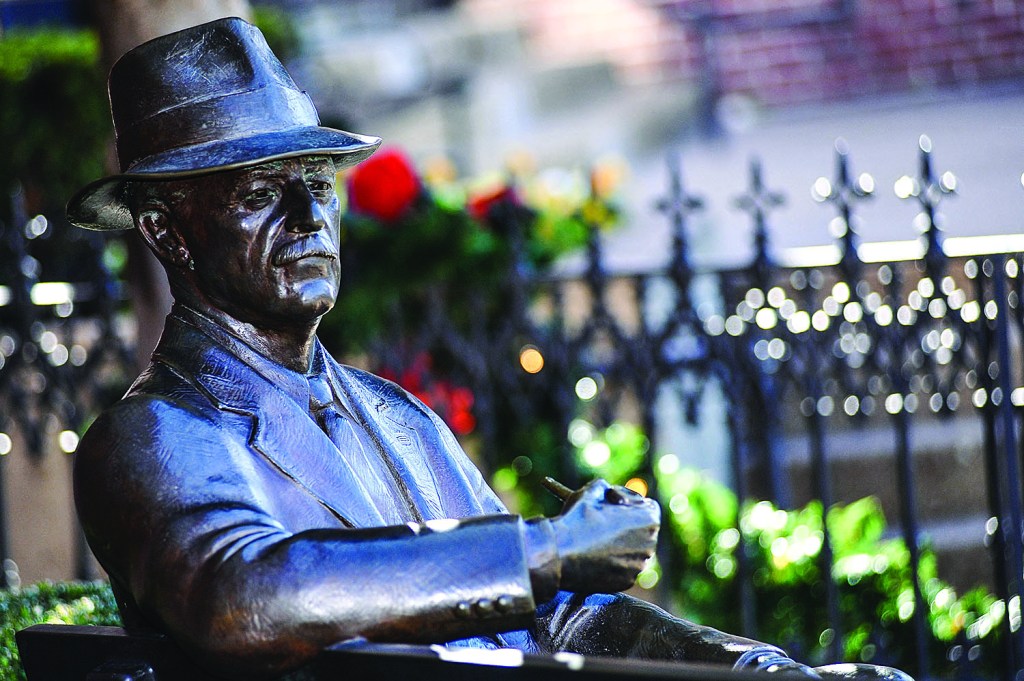 William Faulkner’s 120th birthday will be celebrated on Monday at Tallahatchie Gourmet. The event also commemorates the 20th anniversary of the unveiling of Faulkner’s statue on the Square. (Photo/Bruce Newman)

Oxford’s Nobel Laureate William Faulkner will be honored with jazz and cake on the occasion of his 120th birthday, Monday at 7 p.m at the Tallahatchie Gourmet restaurant on the Square. Admission is free. Complimentary cake and appetizers will be provided. A full cash bar and food menu will also be available.

Music will be provided by the Yalobushwhackers Jazz Trio, with a toast by Thacker Mountain Radio host and author, Jim Dees. Tallahatchie Gourmet is located at 1221 Van Buren Ave, in the basement of Neilson’s department store.

The event will also commemorate the 20th anniversary of the unveiling of the Faulkner statue in front of City Hall. The sculpture was created in 1997 amid much civic discourse — and some discord. A book about the statue saga, “The Statue and the Fury,” written by Dees, was published last year. Dees was a reporter for the Oxford EAGLE at the time and in the book, he chronicles the year-long uproar starting when a magnolia tree was cut down in front of City Hall to make room for the statue.

“All Faulkner broke loose,” Dees said with a smile. “The city had already authorized a plan to cut down 100 oak trees to make a five-lane out of West Jackson Avenue. People picketed, packed aldermen meetings, hissed and shook their fists. Somehow the cut magnolia and the statue became intertwined with the anti-development fervor. The sculptor, Bill Beckwith, kept his head down and got the piece done.”

Aside from the statue story, Dees’ book also covers the many well-known figures who passed through Oxford in 1997.

“It was a pretty wild year.” “The Statue and the Fury” will be available at Monday’s event.

The original Tallahatchie Gourmet is based in New Albany which is where Faulkner was born. The one here is the closest establishment to his statue in Oxford. I think we’ll have good mojo,” Dees said.

Two other notable Mississippi authors will be in town Monday. Catherine Lacey, the 2017 Grisham Writer-in-Residence at Ole Miss will interview National Book Award winner Jesmyn Ward at 5 p.m. at Off Square Books, located across the street from Tallahatchie Gourmet. The Faulkner festivities will start at the conclusion of the Lacey-Ward event.