A year removed from knee injury, Ole Miss’ Ken Webster getting back to ‘old self’ 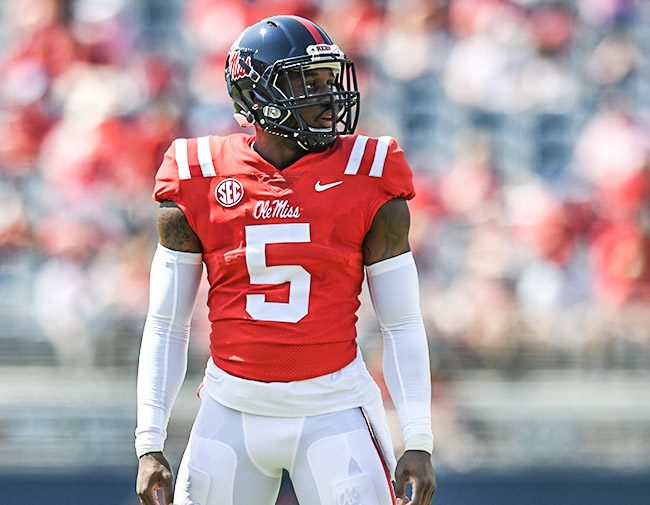 All Ole Miss’ cornerback knew once he fell to the Camping World Stadium turf after his knee buckled trying to break up a pass during the Rebels’ season opener against Florida State last season was it was bad. But how bad? One torn ligament? Two? Maybe three?

“I just knew it wasn’t stable and I couldn’t walk,” Webster recalled.

Turns out it was all of them.

“I felt like all my hard work was a waste of time really, but my teammates, they kept me motivated through the process,” Webster said. “I felt bad I let my teammates down and not finishing the season with them.”

With a clean bill of health, Webster has the chance to do that this season.

Webster’s reconstructive surgery was followed by what he called “the worst rehab I’ve ever been through.” The first few months after the surgery went by without Webster still being able to walk while he also found it hard to sleep some nights.

But the grueling sessions helped speed up Webster’s recovery. He was back running in the summer, participated fully in training camp and made his return to the field for the first time since the injury against Tennessee Martin on Sept. 9 after serving a one-game suspension for an offseason shoplifting arrest.

Webster has four tackles and a pass breakup as a second-team corner but is making a push to be a starter again. Coaches called the 5-foot-11, 194-pound Webster the best cover corner on the roster before his injury, and they’re not seeing much of a difference now that he’s healthy again.

“I think you always have some concern when a guy comes back from an injury, but when you’re sitting in there in fall camp and asking our receivers who our best corner is, they all say Ken just because of his strength and his length,” interim coach Matt Luke said. “That’s something he has. It’s a God-given ability he has.”

Webster said he has a “full range of motion” and “no limitations” when it comes to his knee, but he admitted getting over the mental hurdle of such a serious injury took some time. The natural urge to protect himself made for some initial hesitation during camp.

“The first day of contact, I was a little nervous,” Webster said. “I wore my brace the first day of practice. After that, I just took it off and have been full go since then.”

Webster got a look at safety in camp as coaches tried to find more proven options at the position, but he moved back to corner before the season started. Things are starting to feel normal again for Webster.

“He hasn’t been challenged a whole bunch but he played physical in the game on Saturday (against Cal) and really has done a good job when they’ve tried to attack him,” Luke said. “I’ve been very, very pleased with him.”

Said Webster, “I’ve come back into my old self basically.”

Now he’s out to convince potential future employers that he hasn’t lost a step. Webster was granted a medical redshirt and has two years of eligibility remaining but is eligible for next year’s NFL Draft should he decide to leave early.

“I want to show (scouts) I’m the same guy if not better,” Webster said. “I’m a great teammate. I’m still the same person as I left as. … When they come out to practice, they see I’m moving around just as good as I was before.”

After going through a period of uncertainty with the sport he loves, Webster is doing it all with a different perspective.

“I value everything now,” he said. “In practice every day, you’ve got to come in and take full advantage of everything and day-to-day life pretty much. Anything can be taken from you at any moment.”

Ole Miss center Sean Rawlings to have surgery on…