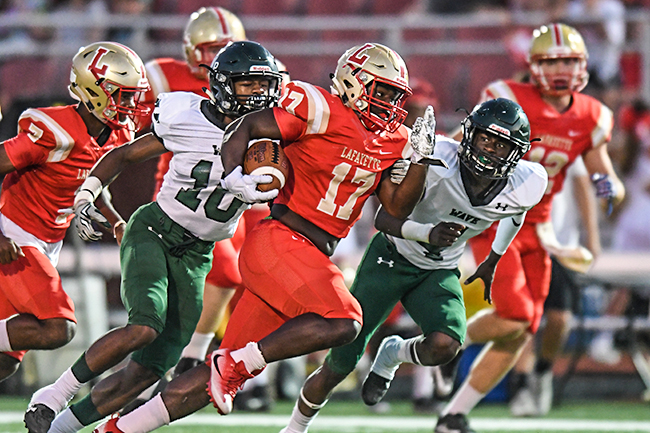 Lafayette High’s Jamarcus Quarles (17) scores on a 65 yard run on the opeing series of the game against West Point at William L. Buford Stadium in Oxford, Miss. on Friday, September 22, 2017.

Lafayette hosted No. 1 West Point on Friday night to kick off the Commodores arrival to Class 5A football.

The Commodores hung with the Green Wave early but West Point proved why they are one of the top teams in the state, defeating Lafayette 49-14 at William L. Buford Stadium.

The loss was Lafayette’s fifth in a row and has the 2016 Class 4A state champions still searching for their first win of the season.

“Great football team,” Lafayette head coach Michael Fair said of West Point. “They do a great job. Every now and then you see a group of talented guys come through all in one year kind of like they do and they have a great senior class. …I’m glad this one’s behind us.”

Lafayette (0-5, 0-1 Region 1-5A) punched first when on the third play of the game running back Jamarcus Quarles ran 65 yards to put the Commodores on top early.

The momentum did not stay on Lafayette’s sideline long.

A response was quickly given by West Point (5-0, 1-0) on their first possession. The Green Wave used a nine-play, 80-yard drive that was capped with a 24-yard touchdown run by running back Chris Calvert to level the game at 7-all midway through the opening quarter.

West Point added two more scores in the first quarter, both passes by quarterback Marcus Murphy to Shun Crawford and Jason Brownlee, respectively, for the 21-7 lead.

The final offensive flash from Lafayette came late in the second quarter when Quarles scored his second touchdown of the night. Quarterback Randy Anderson hit his running back for 36 yards to make it a one score game.

From there it was all West Point who scored 28 unanswered points, including two more touchdowns in the first half, for the winning margin.

“We’ve survived,” Fair said of the tough start to the season. “We’ve got a good football team out here. I was really pleased with our effort. I thought the scoreboard was not indicative of how we played. I thought we played hard. Still making mistakes. Still missing some tackles. …a lot of positives to take from tonight but we got to get better. Got to get better.”

Anderson is still progressing as the Commdores’ quarterback on a weekly basis. He struggled to connect on passes, completing three of nine for 50 yards and a touchdown. On the ground Anderson rushed for 40 yards on 11 carries and also recorded Lafayette’s second turnover of the night with a fumble late in the game.

“We need big plays and haven’t had them,” Fair said. “Our young quarterback saw some pressure he hasn’t seen before. This is a nasty defensive front that West Point’s got. Some say the best in the state. So, we were able to hold our own at times. We’re making progress.”

Lafayette hits the road on Friday when they travel to Saltillo.