Ole Miss soccer heads to Arkansas for a Sunday match 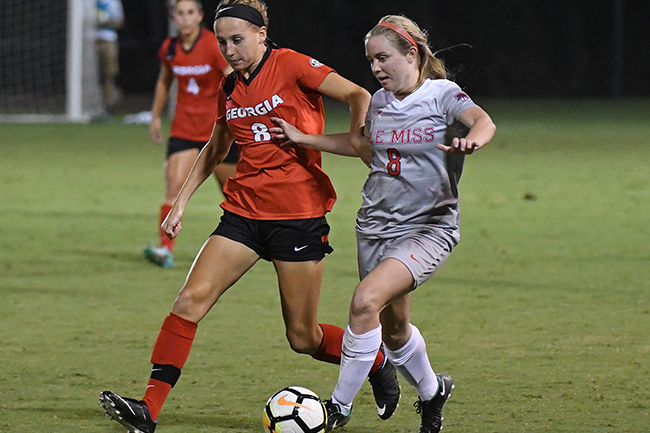 Ole Miss' Alley Houghton (8) and Georgia's Caroline Chipman (8) battle for the ball in Oxford, Miss. on Thursday, September 21, 2017. Ole Miss won 4-1. The Rebels next match is at Arkansas on Sunday afternoon.

KICKERS
• Following a Thursday night turnaround, the Rebels hit the road for a Sunday afternoon tilt at Arkansas.
• No. 20 Ole Miss handled Georgia, 4-1, in the SEC home opener Thursday night, thanks to two goals within the first 10 minutes, and two more to seal the deal in the final 45 minutes.
• Thanks to the four goals scored, the Rebels quickly moved back to the No. 1 spot in the NCAA in scoring heading into the weekend, now with 42 on the season.
• As has been the case throughout the season, the Rebels got goal production from four different players.
• Ole Miss heads into Sunday looking to make it three-straight wins in Fayetteville after the 2015 double overtime victory (2-1), and a 2-1 win in 2013.
• After opening SEC play at No. 7 Florida last week the Rebels moved up to No. 20 in the latest United Soccer Coaches (USC) poll, and are one of only four teams in the SEC in the top 25.
• With the first release of the NCAA RPI Monday, Ole Miss checked in at No. 30, its highest debut since 2013.
• Of the four SEC teams in the RPI top 20, three are on the Rebels’ schedule within the next five games.
• The Rebels are also still tied for first in the league with seven shutouts, only giving up a goal each to ranked opponents in No. 23 Michigan (1-1 draw) and No. 7 Florida (1-0), and Georgia last Thursday night (4-1 win).
• Freshman Channing Foster and junior CeCe Kizer continue their footrace in goal production this season, as Foster leads the league and is second nationally with 10 goals, while Kizer has nine after both scored one each Thursday.
• The Rebels continue to rank as one of the nation’s leader in nearly every offensive category, including eighth in corner kicks per game (7.70), second in points per game (11.60), second in scoring (4.20 goals/game), fourth in shots (20.80) and shots on goal/game (9.80), fourth in assists (32) and second in points (116).

­­ SCOUTING ARKANSAS
Led by sixth-year head coach Colby Hale, the Razorbacks are 6-4-1 on the season coming off a 0-0 draw at Vanderbilt in double overtime Thursday night. Arkansas opened up SEC play last weekend with a 1-0 win over Mississippi State, and sit tied for second in the league standings early on. The Razorbacks picked up non-conference wins over North Texas (2-0), Abilene Christian (6-1), James Madison (2-0), Mississippi Valley (11-0) and Oral Roberts (3-1). With 31 goals, Arkansas is averaging 2.82 goals per game, led by seven from Parker Goins, who also leads the club in points with four assists. Taylor Balham is second with four goals, while Stefani Doyle and Kayla McKeon have three each. Rachel and Jordan Harris have split time in goal, with Jordan allowing only one goal in 425 minutes of play, while Rachel has allowed the other 12 in seven matches.

SERIES HISTORY – ARKANSAS
Ole Miss holds the all-time advantage in the series with a 15-5-2 record, including winning three of the last five matches. The Rebels dropped last year’s meeting, 2-1, in Oxford, but scored a last-minute goal in the last contest in Fayetteville, a 2-1, double OT victory. Overall, Ole Miss has won nine of its 11 games ever in Fayetteville, including seven-straight from 1997-2009.

SPREADING THE WEALTH
Ole Miss is near the top of the NCAA in nearly every offensive category, including 42 goals (1st), points (116 – 2nd), while also ranking second nationally in points per game (11.60) and scoring offense (4.20). The Rebels are fourth nationally in shots per game (20.80), and SOG per game (9.80). While two players — freshman Channing Foster and junior CeCe Kizer — have contributed with 19 of those, it hasn’t stopped many other Rebels from playing a factor in the scoring column thus far. Eighteen different players have either scored or carded an assist thus far, with 15 different players scoring and 12 different Rebels dishing out helpers. Foster and Kizer have combined for 19 goals. Bella Fiorenzo, Grace Waugh, Julia Phillips, Mary Kate Smith, Gabby Little, Molly Martin, Alley Houghton, and Grace Johnson all have multiple goals this season.

DON’T DOUBT THE DEFENSE
While the obvious highlight this season has been the goal scoring, the Rebel backline and defense hasn’t gone unnoticed, either. Through 10 games, the Rebels have allowed just three goals — one in the 1-1 draw with No. 23 Michigan, another in the 1-0 loss at No. 7 Florida, and one late in the 4-1 in over Georgia (9/21). The seven shutouts are already better than the four accumulated in all of 2016, and the Rebels have been near dominant in not even allowing an attack with only 61 shots taken by opponents. Junior goalkeeper Marnie Merritt and sophomore Claire Williams have been solid in goal, only having to make 21 combined stops thus far. With their seventh shutout of the season in the win over Memphis on September 10, the Rebels broke the school record for the longest time holding opponents scoreless at 568 minutes (continued into the Florida game), snapping the 2012 record of 483 minutes.

REBELS ON THE RISE IN NATIONAL POLLS
Following the opening weekend of SEC play, the Rebels made another jump in the United Soccer Coaches (USC) Top 25, moving up to No. 20. Ole Miss is one of just four teams in the SEC in the top 25, joining South Carolina (No. 3), Florida (No. 6), and Tennessee (No. 21).

BALANCED ATTACK LEADS REBELS OVER BULLDOGS
For the fourth time this season, Ole Miss posted at least a three-goal performance from all different players in Thursday night’s win over Georgia. Freshman Channing Foster netted the first in the fourth minute, before Julia Phillips punched one in six minutes later. Coming out of half, freshman Grace Johnson scored her second of the year, while CeCe Kizer closed the scoring with her ninth. While three hat tricks have already been recorded, and separate match with a two-goal performance, the Rebels have kept it pretty balanced in terms of spreading out the scoring. Back in the 3-0 win over Lamar, three different players were responsible for goals, as wazs the case in the 5-0 win over High Point, and again in the 4-0 victory over Tulsa.