Skateboarder wants to show off Oxford Skate Park with community 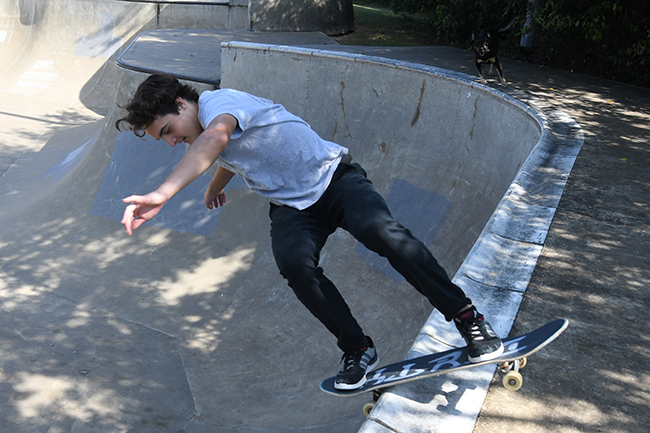 Skyler King rides his skateboard at the Oxford Skate Park, in Oxford, Miss. on Wednesday, September 20, 2017.

Skyler King was 6 years old when he woke up one Christmas morning to find a skateboard under the tree.

King moved to Oxford about four months ago to be closer to friends and the Oxford Skatepark which he says is one of the best in Mississippi, and maybe in the country.

“The ‘swimming pool,’ or bowl is really big,” King said. “I know people from all over the state and even other states who come to Oxford just to skate at the park here. Nothing compares to this park. Other parks are small and mellow and Oxford’s is big and exciting.”

King, 20, spent most of his childhood at the local skate park in Horn Lake where he and all of his friends hung out, honing their skateboarding skills. About four years ago, he started to skate competitively.

“I don’t do many in Mississippi because there aren’t many tournaments here,” he said. “I go to other states, like I just went to one in Atlanta, Georgia and it was fun getting meet so many people.”

In 2014, he won a competition in Memphis and was sent to attend Camp Woodward, a world-renowned sleep-away summer camp in Pennsylvania that focuses on action sports, like skateboarding, gymnastics and cheerleading.

“I got to stay for a week,” he said. “It’s probably the best thing to happen to me.”

King says he skates mostly for fun but competing helps him to progress as a skater.

He’s currently working on a video to send to sponsors.

“It’s hard to get into skateboarding professionally in Mississippi,” he said. “There’s been no pro skaters coming out of there.”

While King works to break that statistic, he wants to share his love of skateboarding and show off the Oxford Skatepark with skateboarders near and far, as well as his fellow Oxonians.

King, along with Mike Rains are hosting Oxford Rebate Jam, a skateboard competition, along with a day of music, food and giveaways from sponsors.

The Rebate Jam will be held at the Oxford Skatepark on Oct. 7 from 11 a.m. to 5 p.m. Sponsors will be on hand to sell gear and provide free gifts and prizes to the skaters. Some of the sponsors include Dirty Skateboards, Fluxus Skateboards, SkateMS, and Odd Collar Magazine.

“We want to bring the community together,” he said. “We want to have a big session and everyone just be together and vibe off each others skating.”

King said the main focus of the event won’t be the competition, but there will be some contests, including a Best Trick Competition and that everyone, whether they are skateboarders or not, is welcome to the event.

By opening up the skateboarding world to the rest of the community, King hopes to change the public’s opinion about the sport.

“Police think skateboarders are the worst people,” King said. “I’ve been pulled over twice for skateboarding.”

“It’s my only transportation right now,” he said.

Like most sports, skateboarding comes with a risk of injury.

“I’ve never hit my head,” King said. “But I broke my wrist and ankle before.”

Bids for two new Oxford roads to be opened…