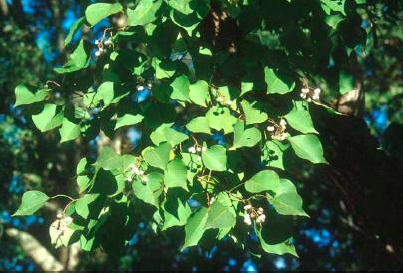 GULFPORT, Miss. (AP) — The Mississippi Forestry Commission is trying to control the population of an invasive species of trees that damage the native ecosystem.

News outlets report that MFC and Plan-It Geo recently launched an online tool to report sightings of the Chinese Tallow, also known as the “Popcorn” tree.

Popcorn trees were imported decades ago from eastern Asia. They have distinct heart-shaped leaves, dangling yellow flowers and fruit that appear similar to popcorn.

Urban Forestry and Forest Health Coordinator Todd Matthews says Popcorn trees look attractive, but they kill the native ecosystem and their seeds are toxic to animals and humans.

Matthews says the state hopes to use the data collected from the sightings to get leverage for federal funding to attack the invasion.

Popcorn tree sightings can be reported at https://helpstopthepop.com/tallowtree