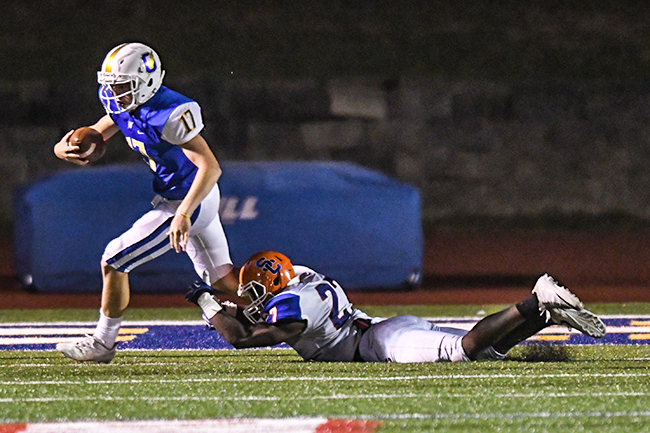 In a battle of the Chargers, Oxford fell victim to an injury-filled upset to Southaven, losing by a score of 23-13 at Bobby Holcomb Field. It was both team’s Region 1-6A opener.

Oxford came into the game with a depleted running game, as star running back Hiram Wadlington was out with a knee injury.

“He’s still being evaluated day-to-day, we’ll see how his rehab is going and see where he is next week,” Cutcliffe said.

The hits kept coming for the Chargers, with starting quarterback John Reese McClure and starting tight end J.J. Pegues both leaving the game prematurely with injuries.

Oxford came out to an early 7-0 lead off Pegues’ score, but Southaven (2-3, 1-0) was able to capitalize off a few of the Chargers six turnovers in the game to take the lead. With McClure sidelined, sophomore John Meagher had to lead Oxford’s attempt at a comeback.

Meagher finished the game with 11 of his 22 passes completed for 150 yards, one touchdown and one interception. Meagher also gained 45 yards rushing on the day, but was taken down in the backfield multiple times, losing 31 yards total.

Oxford was down 23-7 around nine minutes in the fourth quarter but fought back to give themselves a chance at the end. An eight-yard touchdown from Meagher to tight end Joe O’Keefe cut the lead to 23-13, but the Chargers were unable to convert the two-point conversion.

On the ensuing kickoff, Oxford was able to run down a perfectly placed onside kick to retain possession, and drove down the field but were unable add any more points to the total. While the loss was disappointing, Cutcliffe was pleased by his team’s effort late in the game.

“I was proud of us for not quitting and continuing to compete, but like I said there’s way too many mistakes across the board,” Cutcliffe said. “Definitely a lot of things we have to go to work on and that really starts with me,” Cutcliffe said.

Oxford will travels to South Panola on Friday.