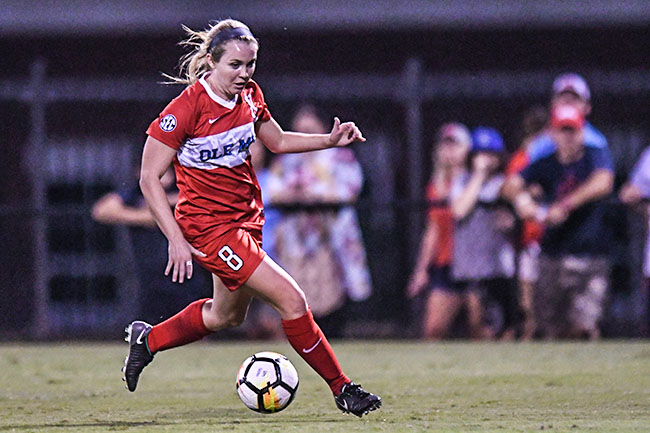 Transitioning to the collegiate level can be difficult for any athlete, no matter how dominant they were during their high school career.

Alley Houghton is no exception.

The Ole Miss soccer forward is in her second season with the Rebels and after some growing pains she has started to find her footing on the pitch.

Houghton was heralded as one of the key pieces to the Rebels’ 2016 recruiting class, coming from across town at nearby Lafayette High School.

As a Commodore, Houghton earned a state championship, two Mississippi Gatorade Player of the Year honors and set a new career state scoring record with 250 goals.

It was all a recipe for Houghton to transition to Ole Miss and continue her success as a Rebel.

Turns out that was easier said than done.

During her freshman season Houghton played in 15 of the Rebels’ 20 games and started in six of them. She played 566 minutes total, scoring two goals and had zero assists.

The learning curve was greater than anticipated.

“It was definitely a big adjustment to the game and how fast paced the game is,” Houghton said. “But I felt once I started getting adjusted it just felt like normal to me.”

Houghton anticipated how fast the collegiate game would be compared to her previous four years spent at the high school level, but that did not mean she was prepared.

After rough first go in the Southeastern Conference ranks Houghton took the spring and summer offseason to work on what she needed to.

First was increasing her stamina, from there Houghton felt the rest would fall into place.

“Something I really focused on this summer was fitness,” Houghton said. “I felt like i struggled with it in past seasons. Just how much I’ve gained in fitness has helped me work harder and just make better runs and also working on my shooting.”

Gains have already been made 10 games into Rebels’ 2017 season as Houghton has become a key player off the bench.

Houghton has recorded five assists, tying her for second in the SEC, heading into last week. The assist mark also puts in the top-five nationally. She has also found her aim to be a little more accurate having already matched her goal total from a season ago.

Houghton has taken 20 shots, 11 being on goal. That is an increase of eight and five from last year, respectively.

“Big improvement for Alley, she is a firecracker,” Ole Miss head coach Matt Mott said. “She gives us a big spark off the bench, and has great pace and knows how to score.”

Ole Miss is now entering the meat of their SEC schedule and this time around Houghton is better prepared to help her team succeed as a push to SEC and NCAA Tournament berths.

“I definitely want to keep being more dangerous,” Houghton said. “Of course, trying to score more when it’s more important. But, just playing as a team and making things happen up top.”