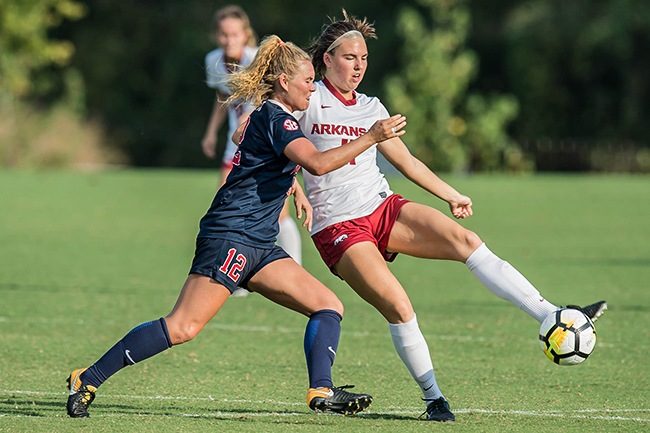 FAYETTEVILLE, Ark. – A first-half goal and stellar defensive play resulted in a key road win for No. 20 Ole Miss (9-1-1, 2-1 SEC), as the Rebels claimed a 1-0 shutout over Arkansas to match the best start in school history.

Ole Miss posted a score in the 31st minute when CeCe Kizer put the ball in the back of the net from 18 yards out on an assist from Bella Fiorenzo. The Rebels dominated defensively, not allowing a single shot on goal to secure the eighth shutout of the season.

The Rebels went on to control the opening period with five shots in the first 45 minutes, holding the Razorbacks (6-5-1, 1-1-1 SEC) to just five attempts. The Hogs looked to have the equalizer in the 48th, but were whistled for offside.

Arkansas would post back-to-back shots in the 73rd minute, but goalkeeper Marnie Merritt would cover the ball to maintain the shutout. Four minutes later, freshman Channing Foster would take a ball all by herself downfield, but her attempt from 20 yards out went high.

The Razorbacks went on to find the back of the net with just three minutes to go, but were once again offside on the play. From there, the Rebels stayed strong on the backline and secured the shutout in full-time.

Overall, Ole Miss once again led the way with 14 shots to Arkansas’ nine. Foster finished with seven on the afternoon, while Kizer had three. The Razorbacks held a 7-3 advantage in corner kicks, but the Rebels were solid clearing out all afternoon.

Up Next
The Rebels return home to host No. 3 South Carolina on Friday, Sept. 29, at 7 p.m. at the Ole Miss Soccer Stadium.