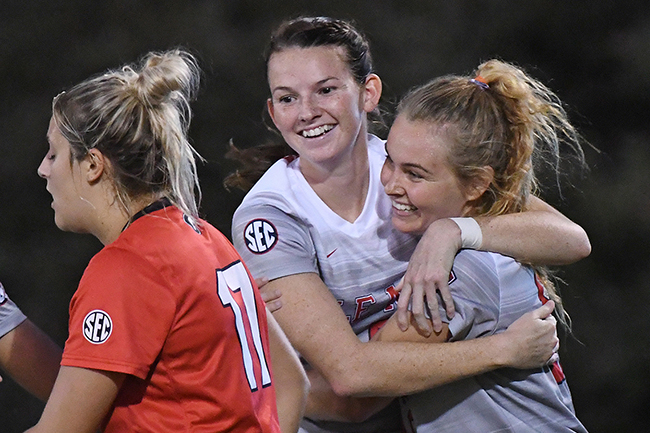 Ole Miss' Channing Foster (12), right, celebrates her goal with CeCe Kizer (5) against Georgia in Oxford, Miss., Thursday, Sept. 21, 2017. Foster leads the Southeastern Conference and is second nationally with 10 goals, while Kizer has nine after both scored one each against Georgia.

“It was without question my toughest year,” Mott said.

Ole Miss’ soccer team had a rare losing season under its seventh-year head coach in 2016, finishing 9-11 overall with just four Southeastern Conference wins. The underwhelming finish came a year after the Rebels made a run to the Sweet 16 in the NCAA Tournament.

The Rebels have turned it around this season.

Ole Miss (8-1-1, 1-1-0 SEC) has nearly matched its win total from all of last season through 10 matches. The Rebels are one of four SEC teams in the United Soccer Coaches poll, coming in at No. 20, and enter today’s match at Arkansas at No. 30 in the NCAA’s latest RPI rankings.

The Rebels have done it with one of the nation’s most prolific offenses.

Ole Miss has scored 42 goals, putting the Rebels on pace to set a new record for goals in a season. Ole Miss is chasing the 2013 team, which netted 64 goals.

The Rebels have scored at least four goals in six matches, including their last time out in a 4-1 win over Georgia on Thursday. Their 4.2 goals per match rank second nationally while Ole Miss also ranks in the top 10 in points per match (11.6), shots per match (20.8) and assists per match (3.2).

“Going forward, there’s a mindset in our team that we just want to score,” Mott said. “Those guys up front are really hungry to get the goal and are finishers.”

Kizer, who’s benefiting from a clean bill of health after struggling with a sprained ankle throughout the SEC portion of last year’s season, is also tied for second nationally with seven assists.

“I think we do a really good job of once we’re on the field, we communicate what each other needs and say, ‘Hey, what do you want me to do in this situation?’” Kizer said. “The more we play with each other, the more we know where each other needs to be in certain situations.”

Foster is one of seven new starters for the Rebels. The revamped lineup has made Ole Miss a faster team than it was last season, which Mott believes allows the Rebels to eventually wear teams down after keeping possession for most of their matches.

“We’re able to keep the ball really well, much better than we have ever,” Mott said. “When you can keep the ball, you make teams chase you and they’re only going to chase you for so long until they really get tired out. Then the game really opens up and you can get at teams.

“It’s kind of a complete new, kind of revamped team is what it is.”

There are also players who have been around a while in addition to Kizer still playing their part. Junior goalie Marnie Merritt leads a team ranked in the top 20 nationally in save percentage (.875) while senior midfielder Bella Fiorenzo has thrived in her first season as a team captain.

“Last year, we just struggled with someone really stepping up on the field and being that person we can look to when times got tough,” Kizer said. “I think the biggest difference has just been having Bella in that role.”

The blend of leadership and talent has the Rebels on track to return to the NCAA Tournament and believing they’ve got what it takes to contend for a regular-season SEC championship.

“I think it’s kind of up for grabs,” Mott said. “There are nine or 10 teams that could win it if they get on a roll, and I think we’re one of them.”