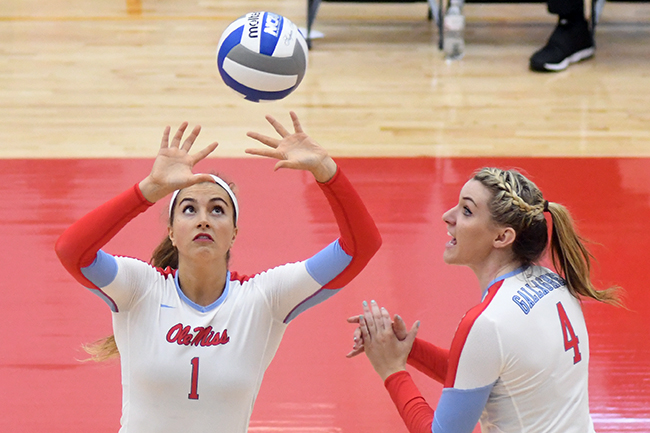 Ole Miss' Lauren Bars (1) passes as teammate Delaney Gallagher (4) looks on against Alabama in volleyball at the Gillom Center in Oxford, Miss. on Sunday, September 24, 2017.

Alabama jumped out to a 10-4 lead in the first set and went on to win it 25-18 behind seven attack errors by the Rebels.

Ole Miss built an early 8-2 lead in set two, before the Tide used an 8-0 run to take a 10-8 lead midway through the second set. Six kills from Ole Miss in the next 10 points, including three from senior Kate Gibson, gave the Rebels the lead again, 15-13. The Rebels never trailed the rest of the way, winning the set 25-21 to even the match.

Tied 14-14 in the third set, Alabama went on a 10-3 run to go up 24-17 with seven set points. Junior Caitlin Wernentin got the comeback started with a huge kill and then Nicole Purcell began a string of eight straight serves. Lexi Thompson and Gibson posted back-to-back kills to pull the Rebels within 24-20, forcing an Alabama timeout. Two huge blocks by Thompson and freshman Bayleigh Scott made it 24-22 and the Tide used their final timeout. The Rebels tied it up 24-24 on a double block from Wernentin and Scott followed by an attack error from Alabama.  Gibson and Thompson, who both finished with double-doubles, delivered back-to-back kills again to cap the 9-point comeback for the set 26-24 and a 2-1 lead.

With momentum on their side after the third set comeback, the Rebels looked to finish the Tide off in four, but Alabama stayed close the entire set. Ole Miss led 15-14 at the media timeout. Tied 17-17, the Rebels won three of the next four points to lead 20-18 helped out by one of Gibson’s three service aces in the match. Bama called timeout, but they never got closer than two. With the Rebels leading 23-21, sophomore Emily Stroup put down her 10th kill of the match to hand the Rebels their first match point, 24-21. Alabama won the next point, but Thompson was not about to let it get any closer, stepping up and closing out the Tide 25-22 and the match 3-1.

Quick Hits…
• Ole Miss improved to 10-5 overall and 1-1 in the SEC.
• The Rebels have now won five of the last six against Alabama, including three straight in Oxford.
• Senior outside hitter Lexi Thompson notched her 10th double-double with 14 kills and 13 digs and added two blocks.
• Kate Gibson posted her SEC-leading 11th double-double with 13 kills and 12 digs and added 2 blocks and 3 service aces.
• Sophomore Emily Stroup posted a double-double from the right side with 10 kills and 10 digs.
• Nayo Warnell tallied 8 kills and freshman Bayleigh Scott finished with 6 kills on a .500 clip from the middle. Scott also had 4 huge blocks.
• Sophomore Jordan Fate finished with 28 assists an 8 digs and freshman Lauren Bars had 18 assists as the Rebels hit .224 for the match.