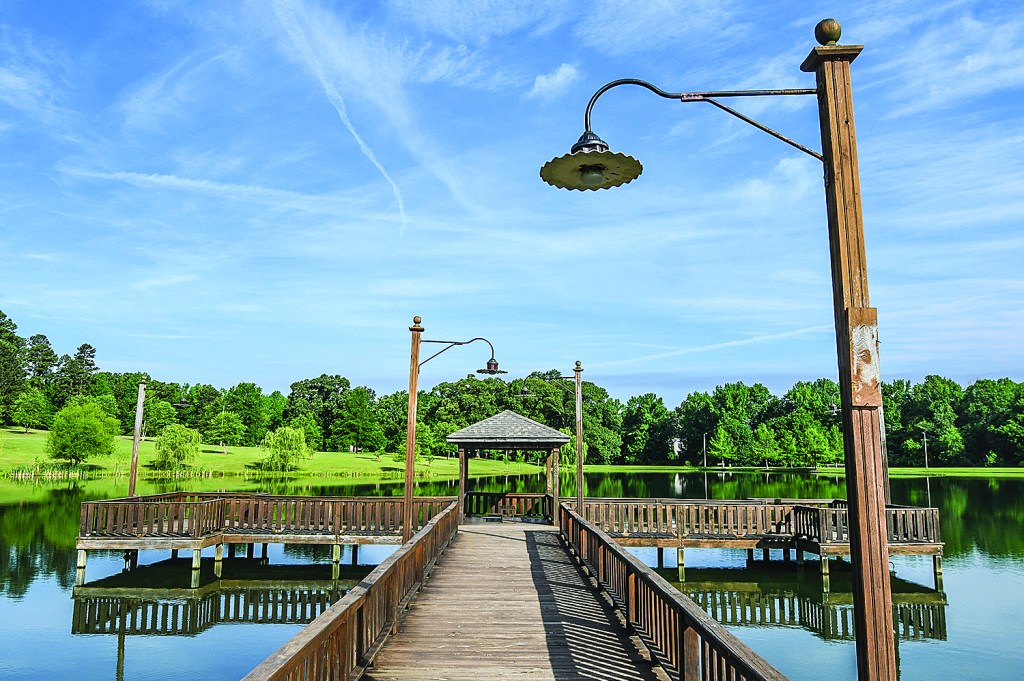 $40,000 has been set aside from Baptist investment funds for repairs to the Pat Lamar bridge and pier. (Photo/Bruce Newman)

From building parks to supplying law enforcement with additional safety gear, money from the city of Oxford’s 2 percent food and beverage tax and interest earned on a $30 million investment from allowing Baptist Memorial Hospital-North Mississippi to buy out of its lease in 2012 are being invested back into the city.
The city‘s Baptist fund generates about $850,000 in earnings on average each year that gets put back into the general budget. This year, the city received $859,885 from the $30 million investment. The 2 percent food and beverage fund has brought in $1.2 million.
The Oxford Board of Aldermen spend the summer months going over the budgets of each department. Some of the requests for new equipment or machinery get taken out of the budget and placed on a “wish list.” At the end of the budget session, the aldermen look at the requests and future projects needing to be accomplished and review the 2 percent and Baptist revenues and vote on which ones the extra funds will pay for.

The Baptist funds can be spent as the aldermen see fit. However, the 2 percent funds must go toward projects or equipment that helps increase tourism or maintain the popular downtown Square area that is the city’s main tourist attraction.

The Baptist funds will be used for several projects including adding sidewalks to Johnson Avenue ($40,000) and bridge and pier repairs at Pat Lamar Park ($40,0000). The city is putting $100,000 of those funds into an escrow account for a future fire station around Oxford Commons, and another $100,000 will be put into an escrow account for future annexation costs.
The Baptist money is also being used to purchase equipment like a knuckleboom truck ($175,000) and a leaf truck, also estimated to cost about $175,000.
About $32,000 will be spent to purchase additional body cameras for the Oxford Police Department.
“We have some cameras now, but we do not have enough to cover everyone,” said OPD Major Jeff McCutchen. “They will be the same cameras as the ones we have currently.”
The aldermen also set aside $200,000 for the demolition of Riverside Place Apartments complex that was closed this summer after the last of the families living there secured a new place to live.
“We are having a study done to determine if there is asbestos and other environmental issues,” said Mayor Robyn Tannehill last week. “We will then solicit bids for demolition. We have not had a discussion regarding the future use of the property yet.”
The 2 percent food and beverage tax will go toward a few projects to beautify the downtown area, such as creating a plaza on top of the old RSVP building ($40,000) where the Skipwith Cottage used to be located and the creation of the pocket park ($100,000) on the corner of North Lamar Boulevard and Price Street where the old central fire station was located before being demolished in 2015.
Tannehill said the theme for the pocket park has not yet been established.
“There are several ideas floating around,” she said last week. “We will probably have a work session to determine if we will name it or determine a theme for the park. We know it is a priority this year so we wanted to set aside money to get started.”
About $35,000 is being set aside to help with costs associated with Mississippi High School Activities Association for local sports tournaments held in Oxford.
Some 2 percent funds will be used to purchase tents for the Oxford Park Commission ($6,000) and a sound system for the John Leslie Tennis Center ($6,000). About $225,000 has been earmarked for soccer parking at FNC Park and another $40,000 toward including a tennis pro shop at the Oxford Activity Center.
Some equipment being purchased with 2 percent funds includes a hot water sprayer for the Square ($8,000) and a “litter getter” truck ($100,000).
“The hot water sprayer is for cleaning the sidewalks,” Tannehill said. “This unit and the hot water allow for gum and other things that the current machine can’t get up to be removed. Our sidewalks in the downtown area will be cleaned on a regular basis.”
Oxford Environmental Services Superintendent Amberlyn Liles said the “litter getter” machine will help control litter around the Square and all over Oxford.
“The litter machine is to help with the litter control around Oxford, city streets, bike paths and our right of ways, as well as the Square,” Liles said. “This machine will be very helpful in the visual perspective of Oxford.”

Skateboarder wants to show off Oxford Skate Park with…