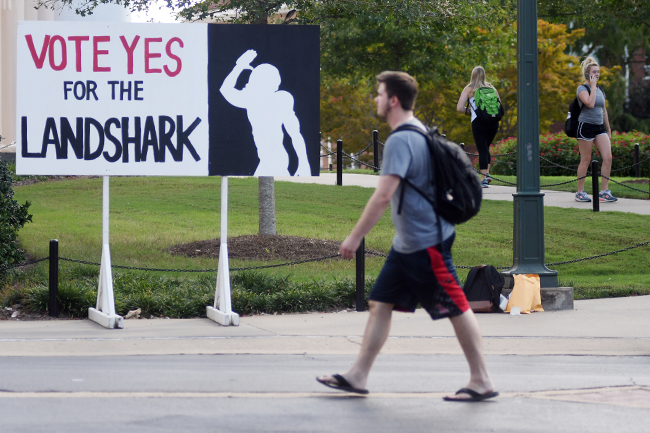 A sign urging students to vote for the landshark for a new mascot for Ole Miss is located outside the Lyceum on campus, in Oxford, Miss. on Tuesday, September 26, 2017.

Ole Miss students will have a little longer to decide on whether to keep Rebel the Black Bear or choose the landshark as the new school mascot.

The vote, which was originally scheduled for today as a one-day vote, is now extending through Friday, Sept. 29.

The decision was announced in a letter sent out by Ole Miss Associated Student Body president Kevin Dion III on Monday night via their Facebook page.

“After a week of stimulating conversation, we noticed that students have taken intense interest in the possible mascot change. Considering the wide-reaching student input, we have decided to open polling for an entire week,” the statement read.

The ASB announced the ‘Landshark’ referendum last Monday, declaring the student vote to take place to either keep or replace the current black bear mascot.

The results of the week-long vote will be announced on Friday evening.