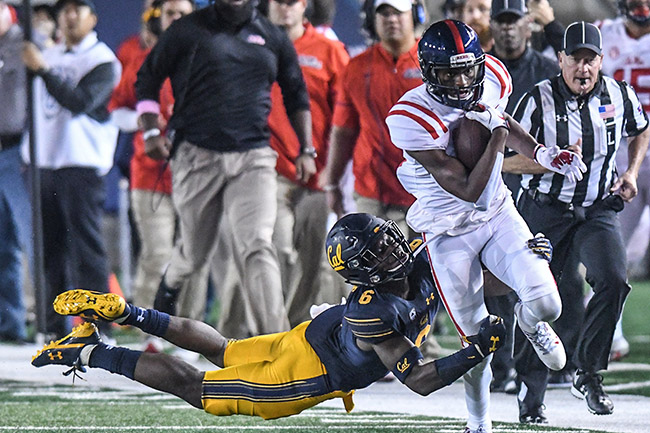 Another year, another stout defense for Alabama.

Ole Miss hopes its tempo can be an equalizer.

The Rebels want to operate their offense at warp speed against Alabama at Bryant-Denny Stadium on Saturday (8 p.m., ESPN). It’s not an objective that’s any different than weeks when Ole Miss isn’t playing the top-ranked Crimson Tide, but there aren’t as many defenses around the country that are as suffocating either.

Ole Miss is out to use its speed to its advantage.

“Every week we’re trying to improve our tempo and get better at what we do,” Ole Miss offensive coordinator Phil Longo said. “I don’t think that’s any different this week. That’s an emphasis every week, and it has been ever since we started preparing for Alabama.”

Despite having a school-record 10 players drafted off last year’s team, the Crimson Tide’s next wave of former four- and five-star signees has Alabama (4-0, 1-0 Southeastern Conference) at its usual spot atop several defensive categories. Alabama leads the SEC in scoring defense and rushing defense and has given up the second-fewest yards in the league.

The front seven is led by defensive tackle Da’Ron Payne, whom Ole Miss interim coach Matt Luke called a future first-round draft pick, and leading tackler Shaun Dion Hamilton at linebacker with All-American Minkah Fitzpatrick anchoring the secondary. Alabama’s recruiting prowess under head coach Nick Saban allows the Crimson Tide to rotate players without much of a dropoff, though Ole Miss wants to go so fast that it limits Alabama’s substitutions as well as the complexities that can be thrown at an Ole Miss offensive line that likely will be without center Sean Rawlings (ankle).

“It’s very important to play fast and get them out of their comfort zone,” Luke said. “We want to keep some of their guys on the field by going tempo. We’ll try to limit the looks they can give us with our tempo.”

Ole Miss (2-1, 0-0) has averaged 66 plays through the first three games and had a season-high 73 at Cal its last time out. But the Rebels’ rhythm was affected by a whopping 16 penalties, most of which often kept them behind the chains as Ole Miss mustered just 131 yards in a scoreless second half.

Three interceptions thrown by Shea Patterson added to the miscues, something the Rebels will have to stay away from against an Alabama defense that’s feasted on turnovers. The Crimson Tide lead the SEC with six interceptions.

“Execution and playing mistake-free football on offense is going to be the emphasis and the key for us on Saturday,” Longo said.

Ole Miss has had more success than most against the Crimson Tide of late, averaging more than 36 points in the teams’ last three meetings with many of those coming through big plays through the air. The Rebels will bring the SEC’s top passing offense into this year’s meeting, but the Rebels will need Patterson’s decision-making to be equally as quick against the biggest, fastest defense he’s seen this season.

“It’s very important to just be on time with the football, to scramble around and try to make plays with their feet,” Luke said. “You have to do that some, but we have to be smart about how long we hold the ball.”