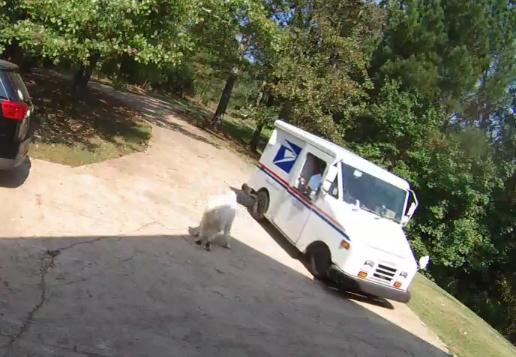 Holly Jubera came home from church Sunday morning and said hello to her two dogs, giving them a few pats. Within seconds, her eyes started to water and burn and she had no idea why – at first.

And then it hit her.

“I realized someone had pepper-sprayed my dogs,” she told the EAGLE this morning.

Holly and her husband Steve were having lunch at a restaurant after Sunday church service when Steve glanced at his phone and saw a U.S. Postal Service truck pull up into his driveway to deliver packages from Amazon via the couple’s outdoor Nest security camera that sends the feed to his phone.

“He saw them pulling up and we decided to head home but didn’t watch the rest of the video right away,” Holly Jubera said. “When I realized someone sprayed the dogs with pepper spray, we watched the footage from the camera.”

What they saw astonished and enraged them both.

The video shows a mail carrier pulling into the Jubera’s driveway near the garage of their home, as the carriers generally do when dropping off packages. The Jubera’s dog, Colonel — a great Pyrenees, is seen wagging his tag, barking and running alongside the mail truck.

The carrier takes out what appears to be pepper spray and aims at the dog who backs off, shaking its head. The postal carrier also appears to spray the Jubera’s 9-month-old golden retriever, Liberty, several times. The carrier exits the mail truck a few times, eventually setting two packages down, continuing to aim the pepper spray at the dogs. The carrier gets back into the truck and sprays the dogs while inside the truck through the window while the door is shut.

The carrier is then seen getting back out of the truck to pick the packages back up and put them back into the mail truck, aiming the spray at both dogs a few more times before finally driving away.

Jubera took the video footage to the U.S. Post Office in Oxford where she showed it to the general manager who said he didn’t recognize the driver from the video but said he would look into the incident.

U.S. Postal Service spokesperson Enola C. Rice told the EAGLE in an email this afternoon that the incident is under investigation.

“Postal officials are currently reviewing the video and gathering additional details about this incident,” she wrote. “The Postal Service takes the customer’s complaint very seriously and an investigation is underway.”
Jubera said her two dogs seemed to not suffer any lasting injuries from the incident.

“My eyes were very sore all day and still hurt a bit on Monday but they’re better today,” she said.

Jubera said posted the video to her Facebook page to bring awareness.

“He may be doing this to other dogs,” she said. “I just want people to be aware this could happen.”

Jubera said she was told that the U.S. Postal Service’s policy is that if there are dogs in a yard, the driver can decide not to deliver the packages.

“There are so many different ways he could have handled this if he truly felt threatened,” she said. “My dogs are the sweetest things and wouldn’t hurt anyone. He had other options.”

Jubera said she has no idea why the carrier decided to get back out of the vehicle and take the packages back after they were already placed near the garage.

“It’s really bizarre,” she said of the carrier’s actions.

The carrier was not one of the Jubera’s regular postal carriers.

“I don’t recognize him,” she said. “But he wasn’t acting like he was in fear. He was acting more aggressive like he hoped the dogs would attack him.”

Since the incident, Jubera has requested that no packages be delivered to her home off Highway 30.