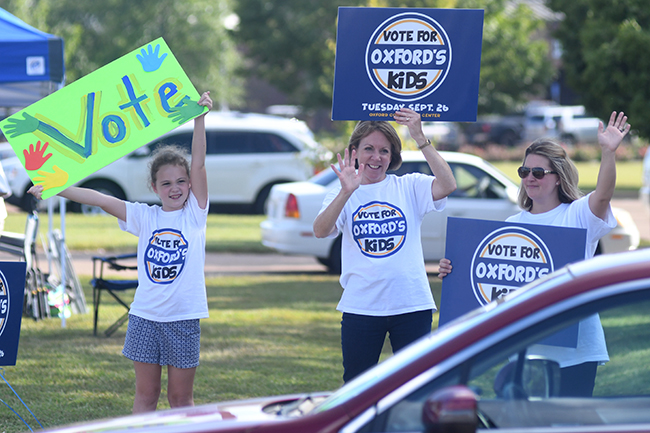 Oxford residents voted on Tuesday to approve a $38 million bond that will allow the Oxford School District to build a new elementary school and make improvements to its existing schools.
The bond referendum passed with 83 percent of voters casing in favor of the bond. In the final count, 1,531 voters said “yes” to the bond, while 315 voted “no.” There are about 112 absentee votes and 60 affidavit votes yet to be reviewed and counted.
The last bond referendum was held in 2012 for a $30 million bond to construct the new Oxford High School. The bond passed with 68 percent of 3,500 votes in favor of the bond.
OSD Superintendent Brian Harvey was pleased with the outcome of the vote.
“I want to thank our steering committee, headed up by Betsy Smith, all of those who voted today — the moms and teachers for their support and everyone who held signs or donated items and money to the campaign,” Harvey said after the results were announced. “This means so much to our district. The Oxford School District has never failed to pass a bond and we still haven’t failed to do that. Looking back, the people of this community have always provided for the resources our children have and are experiencing today and this is a statement that we’re going to do the same thing for our students in the future.”
The bond funds will go toward building a new elementary school next to the Oxford Intermediate School. The current Oxford Elementary School property will be sold.
The bond will also be used to provide for fine arts education at Oxford Intermediate, Oxford Middle and Oxford High School and the completion of Oxford High School and the addition of a new fine arts facility.
Property taxes on a house valued at $100,000 will increase about $38 a year.
More than 1,800 registered voters cast their vote Tuesday at the Oxford Conference Center between 7 a.m. and 7 p.m.
Oxford resident Suzette Shelmire said she voted in favor of the bond.
“My daughter’s a pre-K teacher and I feel like they never finished the high school,” said after casting her vote. “It doesn’t have an auditorium for theatricals and things and I feel like that’s so important.”
Anniemae Robertson said she also vote “yes” even though her own children are now adults.
“I still have grandbabies (in the schools),” she said at the Oxford Conference Center.