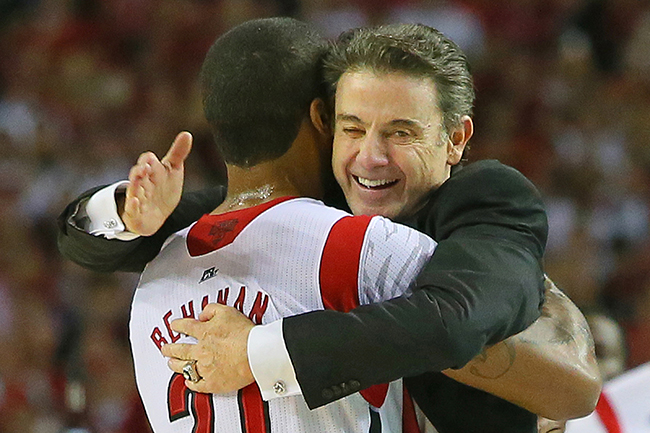 Louisville head coach Rick Pitino, celebrating after defeating Michigan to win the NCAA Championship on Monday, April 8, 2013, has been fired.

The latest scandal involving Louisville’s men’s basketball program has led to a coaching change that could become a permanent ouster for its Hall of Fame coach.

Rick Pitino was placed on unpaid administrative leave Wednesday in the wake of a federal corruption case that shook the college basketball world Tuesday, Louisville interim president Greg Postel said during a news conference. Ten people, including four assistants coaches at different programs and one of adidas’ top executives, were arrested on federal corruption and bribery charges after allegedly taking bribes from agents and financial advisors to steer certain players their way.

Louisville athletic director Tom Jurich was placed on paid administrative leave. Postel said their employment statuses will be determined at later date but that an interim coach and athletic director would be named within the next two days.

As part of their case, federal prosecutors have accused James Gatto, global marketing director for adidas basketball, of helping funnel at least $100,000 to multiple high school players and their families in exchange for their promise to play at an adidas-sponsored school. Court documents reportedly didn’t identify the schools but contained enough details to reveal one of them as Louisville.

The case comes on the heels of an NCAA investigation that found one of Pitino’s former assistants was arranging sex for recruits on campus during visits. Louisville was forced to vacate its 2013 national championship as part of its penalties, which the school is appealing.

Pitino, whose other college head coaching stops included Providence and Kentucky, is the only men’s coach in NCAA history to win two national championships at two different schools. He was inducted into the Naismith Memorial Basketball Hall of Fame in 2013.