Lafayette travels to Saltillo still searching for their first win 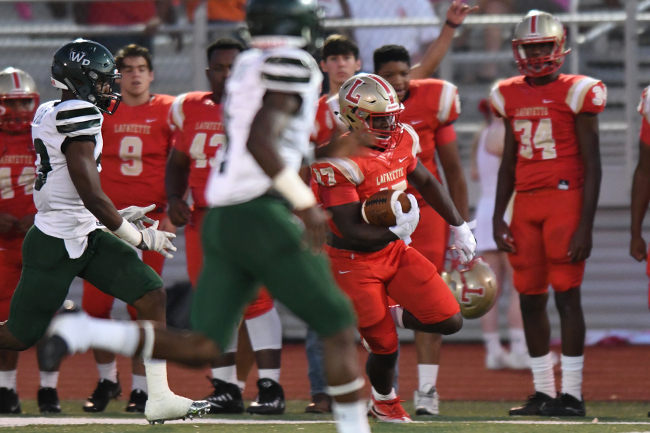 West Point is over and done with.

Now Lafayette can focus on the rest of their season, and the quest for their first win.

After a 49-14 loss to the No. 1 Green Wave last week the Commodores were denied their chance to knock the zero off their win column. Luckily for Lafayette (0-5, 0-1 Region 1-5A) they get six more chances, beginning Friday.

The Commodores travel to Saltillo (7 p.m., 105.1 FM) as each team tries to find their first region win.

“Execution wasn’t where we wanted it to be at this time of the year,” Lafayette head coach Michael Fair said of last week’s game. “Going against a great team like that sometimes it’s to be expected. …We’re getting better. I’m seeing progress every single day. Our guys that are stepping in for several injured players are getting a lot of good experience.”

One positive out of last week for Lafayette was seeing standout running back Jamarcus Quarles breaking the lid of the end zone. The senior running back scored his first two touchdowns (one rushing, one receiving) of the season.

It is a change of pace for Quarles, who had 19 touchdowns in his 2016 campaign and over 2,100 yards. Through five games this year Quarles has rushed for 426 yards on 76 carries.

“We’re a run first football team. Always have been and (Quarles) is a good tailback,” Fair said. “He’ll have more chances, including this Friday night, to have some big runs. He’s worked hard to get to this point. Our offensive line is starting to get better and better. I think that’s one reason why he’s starting to get some cracks at it.”

It is a renaissance season of sorts for Saltillo (3-3, 0-1). The Tigers have already surpassed their win total from the past two seasons combined after going 0-12 in 2015 and 2-10 last season. They suffered a 56-0 loss to undefeated Olive Branch — who is having a turnaround season of their own — to open their region schedule.

Senior quarterback Tytus Heard has thrown for 421 yards and two touchdowns and one interception. Heard has also rushed for 334 yards and seven touchdowns on 62 carries. Senior Dontell Young leads the Tigers on the ground with 434 yards on 88 carries to go with his five touchdowns.