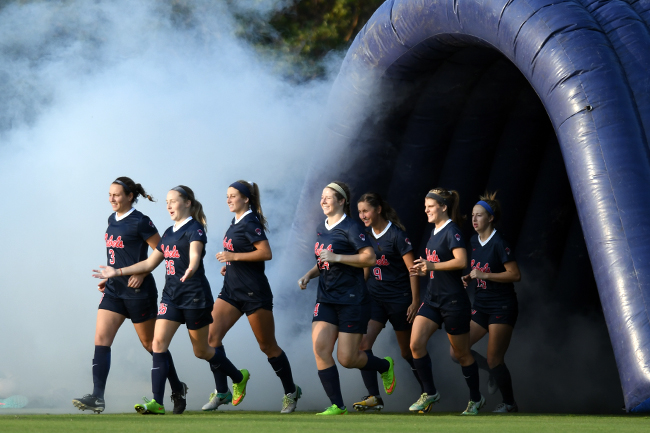 Ole Miss takes the field for the match against Southern Mississippi at the Ole Miss Soccer Stadium in Oxford, Miss. on Sunday, September 3, 2017.

The turnaround season for Ole Miss soccer will get its stiffest test Friday night.

The Rebels will try to keep pace atop the Southeastern Conference standings and enhance their postseason resume against defending SEC regular-season champion South Carolina at the Ole Miss Soccer Complex at 7 p.m. The Gamecocks come in not only as the top team in the SEC again but one of the nation’s best.

South Carolina (9-1-0, 3-0-0 SEC) is ranked third by the United Soccer Coaches and tops the NCAA’s latest RPI rankings. Fresh off a 1-0 win at Arkansas on Sunday that pushed Ole Miss (8-1-1, 2-1-0) to No. 18 in the USC poll, the Rebels have won two of their first three conference matches, already putting the Rebels halfway to their win total in the league all of last season.

A win Friday would draw Ole Miss even with South Carolina at the top of the league standings, but earning it will be anything but easy against the league’s only unbeaten team.

“South Carolina is extremely well coached,” Ole Miss coach Matt Mott said. “I have a lot of respect for them, and they have been doing it well for a long time. … We have to be ready for South Carolina, a very organized and tough team.”

South Carolina has multiple contributors back from last year’s Elite Eight team, including All-American forward Savannah McCaskill, who leads the league in shots and ranks in the top 6 in points and assists. But the Gamecocks’ strength is a defense that’s allowed the third-fewest goals in the SEC and trails only Ole Miss in the number of shutouts (7) they’ve pitched.

Ole Miss will counter with the nation’s second-highest scoring offense spearheaded by the SEC’s top scorers in freshman Channing Foster and junior CeCe Kizer, who are tied for the league lead with 10 goals apiece. The Rebels are plus-4 in goal differential in their league wins with their lone SEC loss coming in a 1-0 setback at No. 7 Florida on Sept. 14.

The Rebels enter the match with an RPI of 23 and in prime position to get back to the NCAA Tournament after missing out on an at-large berth last season, but an SEC regular-season title is also in play with a month to go in the regular season. Ole Miss will have to go through the defending champion to have a realistic shot.

“We have seven big games to go,” Mott said. “None bigger than this Friday night at home against South Carolina.”