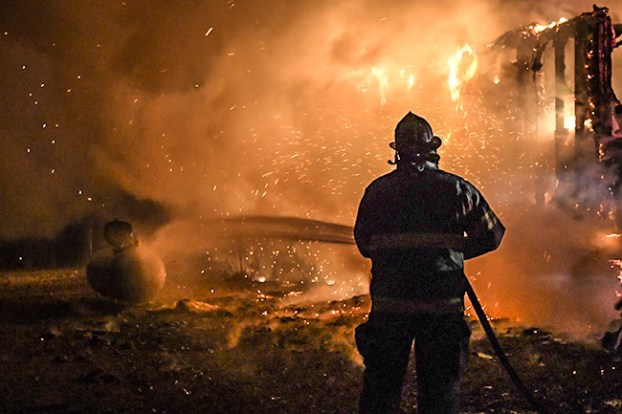 Thursday night, more than 100 firefighters and their families met at the Central Fire Station to look back on the last 40 years, celebrate the past year and look forward to the years to come for the department that has grown alongside Lafayette County.

According to Anderson, the department went on 463 calls throughout the year. About 110 were false alarms, 100 calls were for grass or brush fires, 44 were structure fires and 35 were for vehicle fires.

Firefighters, when not fighting fires, responded to 34 wreck calls, 35 hazardous calls involving gas or chemical spills, and 99 miscellaneous calls that ranged from assisting residents with alarms or helping the furrier residents of the county.

“Firefighters rescue animals as well,” Anderson said with a chuckle.

“For a volunteer fire department, that’s not bad at all,” he said. “But it’s not great. But we’re getting better.”

Last year, the average response time was 11 minutes and 40 seconds.

In 1977, the fire department consisted of three fire trucks and three stations – one in Harmontown, that was already established, one off Highway 30 and another at the Highways 7/9 split.

Today, the department has 14 established fire stations with a 15th under construction.

The department started off strictly volunteer, however, as Lafayette County has grown, the need to have some staffed firefighters became evident. There are three paid firefighters currently staffed at Central Station and starting in October, three more part-time paid firefighters will work out of the Taylor fire station to have more continuous coverage in the southern part of the county.

Ottis Anderson joined the department in 1978, less than a year after its formal creation.

“I kept hearing sirens from fire trucks where I lived, and someone told me we had a fire department and that I should check it out,” said Anderson, who is Wes Anderson‘s grandfather. “I went to a training where we burned a house and I thought, ‘Well, shoot, I can do this.’”

His son Hal Anderson is currently a firefighter with the Lafayette County Fire Department as well as another grandson, Taylor.

“I suspect we’ll have six generations of firefighters eventually,” he said with a smile. “But you know, when you’ve been here as long as I have, they all become my kids and I‘m proud of all of them.”

Oxford, AGO work together to stop internet crimes against children

While the internet can be a useful tool in many aspects of our lives, including providing a plethora of educational... read more