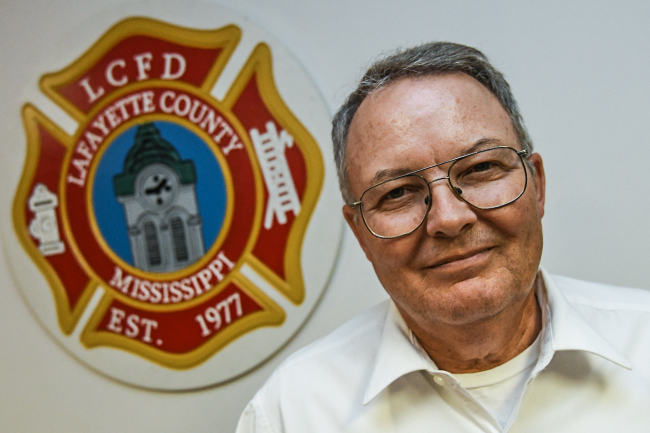 Bobby McCain is the Lafayette County Fire Department’s Fireman of the Year.

Bobby McCain has been fighting fires in Lafayette County since 1987 with the Lafayette County Fire Department. His experience and dedication earned him the title of Firefighter of the Year Thursday night during the department’s 40th General Assembly.

“I don’t think I really deserve it, but I know the other firefighters have a lot of respect for me because I’ve been around a long time,” McCain said.

While driving her to calls, which often coincided with the fire department responding, he met the firefighters and decided it was something he’d like to do.

“I enjoy helping people,” he said. “Especially during one of the worst times of their lives.”

Each fire station nominates a firefighter for the annual award. Then the fire board reviews the nominations and selects the Firefighter of the Year.

Lafayette County Fire Coordinator Wes Anderson said McCain was selected for his dedication to the department, the number of hours he puts in by responding to calls and participating in training sessions.

Also on Thursday, firefighter Dave LaBanc was recognized as the Outstanding “Probie” of the Year.

A “probie” is a rookie firefighter who has been in fire service for less than a year generally and is still undergoing training and certification classes.

LaBanc, the Facilities Projects and Space Management Coordinator at the University of Mississippi, has the most training hours in the department and scored a 92.5 on his final firefighter certification test.

LaBanc decided to become a firefighter in March 2016 after losing his friend and colleague, James Chambers, associate dean for research and graduate programs in the School of Engineering, died when his house caught on fire.

“I was thinking about it after he died and decided maybe that’s a sign, so I signed up,” he said.

LaBanc said his time in the fire department has been rewarding and educational, but also a lot of fun.

“We have a great training facility here and a great training and command staff here,” he said. “We’re really fortunate here in Lafayette County to have one of the best departments in the state.”

A special award was announced to recognize retiring firefighter Bobby Knight for 32 years of volunteer service with the department. Knight was not at the ceremony due to health reasons.