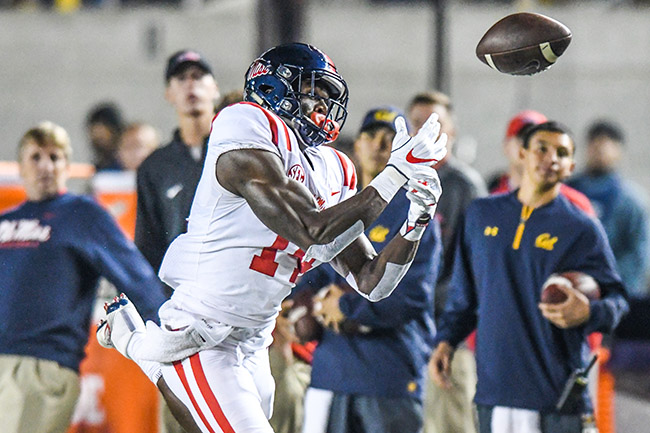 Ole Miss wide receiver DK Metcalf drops a pass against California at California Memorial Stadium in Berkeley, California on Saturday, September 16, 2017. Ole Miss running back Jordan Wilkins (22) was flagged for an illegal block on the play for a 15 yard penalty. The Rebels followed that with a false start penalty to force a 2nd down and 26.

Taking on the top-ranked team in the country is a tall enough task as it is.

Ole Miss doesn’t want to give Alabama any help.

The Rebels will simultaneously be trying not to cause as much self-inflicted damage as they have in recent weeks when they head to Bryant-Denny Stadium on Saturday to take on the top-ranked Crimson Tide (8 p.m., ESPN). The Rebels are the second-most penalized team in the Southeastern Conference, accumulating more than 73 penalty yards per game.

It got ugly the last time out for Ole Miss (2-1, 0-0 Southeastern Conference), which racked up a whopping 16 penalties in its 27-16 loss at Cal. Most of those came up front with holds and false starts along an offensive line that lost center Sean Rawlings to an ankle injury in the first half and may not have him against the Crimson Tide.

Coming off an open date, the Rebels have had an extra week to prepare for the 100,000-plus fans that will pack into Bryant-Denny Stadium. Ole Miss has piped crowd noise into its practices, which interim coach Matt Luke believes has helped.

“That’s obviously been an area of focus for us,” Luke said. “The open date gave us a chance to work on some of that. We think we got those things corrected, but when you get out there in front of 100,000 people, you’ve got to go execute and do it. But it has been better.”

The high number of flags pushed Ole Miss’ average to more than 10 penalties a game, a number that would make it virtually impossible for the Rebels to get out of Bryant-Denny Stadium with their second straight win if it’s reached. Ole Miss won 43-37 in 2015 for just its second win ever in Tuscaloosa.

Fresh off a 59-0 pasting of Vanderbilt, Alabama (4-0, 1-0) leads the SEC in scoring and is second in total offense and total defense. The Crimson Tide has once again proven to be stout against the run, holding teams to a league-low 70.2 yards per game, and is tops in rushing after racking up 496 yards on the ground against Vanderbilt, the most ever under head coach Nick Saban.

On the strength of the nation’s fourth-best passing offense, Ole Miss enters Saturday’s game with the top offense in the SEC. But Alabama will be by far the biggest test in the young season for the Rebels, who often stayed behind the chains against Cal because of the all the penalties and committed three turnovers, one of which resulted in a touchdown for the Bears.

Ole Miss may find the going just as tough Saturday if the Rebels aren’t able to stay out of their own way.

“Execution and playing mistake-free football on offense is going to be the emphasis and the key for us on Saturday,” offensive coordinator Phil Longo said.