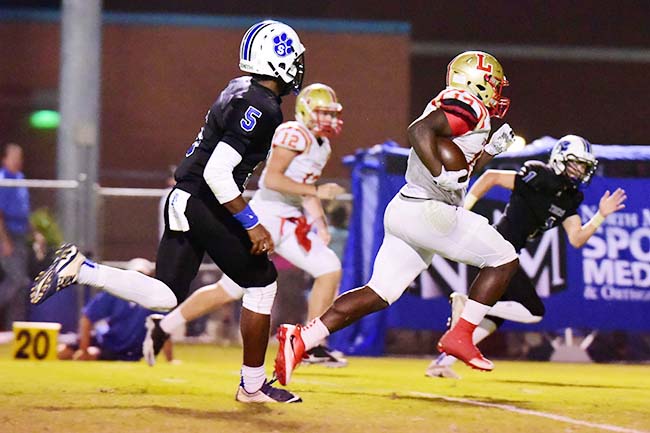 Lafayette High’s Jamarcus Quarles (17) runs for a 49 yard touchdown against Saltillo in Saltillo, Miss. on Friday, September 29, 2017. Lafayette High won 45-14 for its first win of the season.

SALTILLO — Through each week of Lafayette’s 0-5 start, head coach Michael Fair said he saw improvement in the team every game, but so far the Commodores had not been able to channel that improvement into a victory.

But Friday night against the Saltillo Tigers, they finally did. The 45-14 victory put Lafayette at 1-5 on the season and 1-1 in their district.

“It feels really good,” Fair said of the victory. “It’s been a long time, a lot longer than we thought it’d be. Its fun to watch these kids enjoy this, they’ve worked so hard. Effort and hard work have not been an issue. These guys deserved a night like this, to come out here and enjoy this win.”

On the first possession of the game, Lafayette came out firing and quarterback Randy Anderson connected with receiver Drew Dabney for a 19-yard touchdown. On the next play Saltillo came back with a trick play to set up a deep ball for their own score, but just two plays later Lafayette struck back with 51-yard rushing touchdown courtesy of running back Jamarcus Quarles.

That was hardly the end of Lafayette’s offensive fireworks. They quickly scored again next possession as Anderson got loose for a 22-yard rushing touchdown of his own after a return by Jakias Woodall set the Commodores up with great field position. Then just a few plays later, a Saltillo fumble lead to a five-yard rushing touchdown by Quarles and a 28-7 lead.

Saltillo was able to once again score with a trick pass and cut down the Commodores lead, and had a chance right before halftime to cut it down even further but a Lafayette goal line stand thwarted them.

“Right before half we were missing tackles on some of their power-read stuff, and they got down there,” Fair said. “That was a huge stop for us, it gave us a little momentum going into half time that we felt that we had lost in the second quarter.”

The Lafayette defense locked down after that, not allowing another Tigers’ score, and the offense kept clicking, with Quarles breaking off touchdown runs of 49 and 25 yards, and kicker Robbie Langley drilling a 37-yard field goal.

Fair said his team’s offensive performance was great, as Anderson rushed for 126 yards and a touchdown on six carries, in addition to throwing for 46 yards and another score, and Quarles finished with 171 yards and four touchdowns on 16 carries.

“We held onto the ball offensively, which I thought was really good, we had some issues with that early in the season, and it seems like we’ve worked hard to clear that up,” Fair said.

“Quarles is a great running back, and we’ve known that,” Fair continued. “Made some big plays last week, but he had a really good week of practice and we feel like it’s going to hit at any moment, and he was able to get some cracks tonight, and I thought the offensive line did a really good job. He went through two or three touchdowns and wasn’t even touched, so that was fun to see.”

With their first win in 5A finally under their belt, the Commodores can shift their focus to a homecoming game against Lewisburg on Thursday.

Ole Miss’ Andy Kennedy ‘taken back’ but not completely…