No. 1 Alabama too much for Ole Miss in historic loss 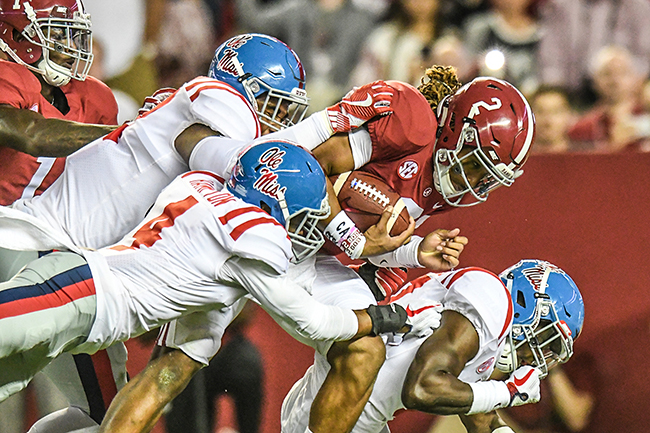 Saturday night was one for the history books.

Ole Miss lost to No. 1 Alabama 66-3 inside Bryant-Denny Stadium on Saturday night.

It was the most lopsided game in the series since a 64-0 Alabama win in 1930. It was also the last time Ole Miss had 60 or more points scored on them by the Crimson Tide.

On the ground the Rebels rushed for 88 yards on 26 carries. Jordan Wilkins had the bulk with 101 yards on 12 carries but Patterson rushed for -16 yards — Alabama’s defensive front sacked him five times — to drop the total yardage.

The lone points for Ole Miss was a 26-yard field goal by Gary Wunderlich.

DeMarkus Lodge had two catches for 72 yards while D.K. Metcalf had three grabs for 46 yards.

After returning from a leg injury he sustained against California two weeks ago A.J. Brown had one catch for six yards and was only targeted twice.
Everything else came up Alabama.

After an opening three and out by Ole Miss, Alabama scored on four of their first five possessions.

The Rebels had a chance to steal some momentum early when linebacker Myles Hartsfield nearly picked off Alabama quarterback Jalen Hurts nearly the goal line. The pass sailed through his arms and the Crimson Tide scored on the very next play.

The Rebels defense was porous all night, giving up 613 total yards.

Alabama’s corps of running backs tallied 365 yards and five touchdowns while Hurts completed 12 of 19 passes for 197 yards and two touchdowns.