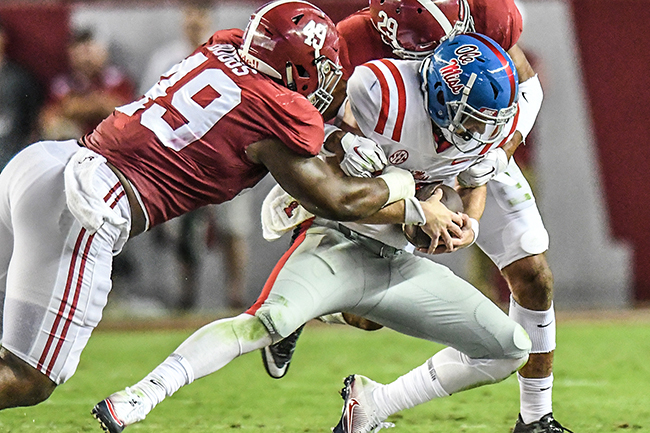 With 1:59 left in the game, Alabama takes a knee which will do it for the Rebels SEC Opener. Final: Alabama 66, Ole Miss 3.

Patterson is intercepted for the second time on Ole Miss’ next possession, and Alabama takes advantage with another touchdown. Tagovailoa uses his arm this time to find Henry Ruggs III for an 8-yard score. Alabama 59, Ole Miss 3, 2:36 3Q

Ole Miss goes for it on fourth down from Alabama’s 31, but Patterson’s pass is incomplete while being pressured. Alabama goes 69 yards on three plays to increase its lead on backup quarterback Tua Tagovailoa’s 2-yard touchdown run. Alabama has gone over 50 points for the second straight week. Alabama 52, Ole Miss 3, 5:57 3Q

Ole Miss goes three and out on its first possession of the second half, and Alabama takes advantage of another short field to pad its lead. The Tide go 29 yards in six plays and cash in on Najee Harris’ 4-yard touchdown run. Alabama 45, Ole Miss 3, 9:07 3Q

Alabama takes advantage of a short field to extend its lead, going 36 yards in two plays after an Ole Miss punt deep in its own territory. Hurts runs in for a 10-yard score. Alabama 35, Ole Miss 3, 3:42 2Q

Alabama is threatening to run away with this game after another touchdown. Josh Jacobs sneaks behind Ole Miss’ drawn-up defense on a play-action pass to catch an 18-yard touchdown. The drive covered 75 yards in 10 plays. Alabama 28, Ole Miss 3, 12:53 2Q

Ole Miss gets on the board with a 26-yard field goal from Gary Wunderlich on its next drive. The Rebels got to Alabama’s 9-yard line with the help of a 35-yard completion from Patterson to DaMarkus Lodge but couldn’t get any closer. Alabama 21, Ole Miss 3, 2:42 1Q

Alabama finds the end zone again with a five-play, 85-yard drive capped by Jalen Hurts’ 3-yard touchdown pass to Hale Hentges. The score was set up by a 61-yard pass from Hurts to Cam Sims two players earlier after a pair of Ole Miss defenders ran into each other trying to tackle Sims along the sideline. Alabama 21, Ole Miss 0, 5:13 1Q

Ole Miss crosses midfield for the first time with the help of a 21-yard run by Jordan Wilkins, the longest run of the season for the Rebels, but eventually has to punt again.

Alabama extends its lead on Ole Miss’ next possession when Levi Wallace intercepts Shea Patterson’s third-down pass and returns it 35 yards for a score. Patterson has thrown all four of his interceptions in the last two games. Alabama 14, Ole Miss 0, 9:20 1Q

The teams trade punts on their first three possessions before Alabama strikes first. Bo Scarbrough caps a six-play, 51-yard scoring drive with a 6-yard touchdown run one play after Myles Hartsfield drops what would’ve been an interception in the end zone. Alabama 7, Ole Miss 0, 10:04 1Q

For two consecutive seasons, Ole Miss stunned Alabama. But last year, in a high-scoring game that the Rebels lead early, the Crimson Tide got back on top in the series, claiming a win in Oxford.

Now it’s time for Alabama vs. Ole Miss 2017, tonight in Tuscaloosa. We will have live score updates here throughout the game so check back at game time.

A week after No. 1 Alabama (4-0, 1-0 Southeastern Conference) crushed what it perceived as an uppity undefeated Vanderbilt team, Ole Miss comes to town having scored 109 points against the Crimson Tide over the past three years — by far the most of any opponent. The Rebels’ 2015 victory at Alabama is the Tide’s last loss at home and only setback in Bryant-Denny Stadium in its last 29 games.

“Anytime you lose a game around here, it sticks for a while,” running back Damien Harris said.

When the Rebels upset the third-ranked Tide 23-17 in Oxford, Mississippi, in front of pop star Katy Perry, it was big news. The next season Ole Miss made it two straight, beating No. 2 Alabama 43-37 in Tuscaloosa. That loss, coming off of two straight seasons without a national championship for the Tide had at least a few folks wondering whether the dynasty was dead. That was hyperbole, and the truth was most reasonable people were not throwing dirt on the Tide after that loss, but no doubt the air of invincibility around Alabama had thinned. The Tide promptly took that perceived slight and used it to fuel another national championship run.

Last season, the Tide restored some order in the rivalry with a victory, but it was far from easy. Ole Miss jumped out to a 24-3 before Alabama came roaring back, and then finally hung on for a 48-43 victory. Rebels quarterback Chad Kelly passed for 421 yards and three touchdowns.

This season Ole Miss (2-1) comes in off an off week, having lost its last game at California. The Rebels are bowl-banned and being led by an interim coach. Matt Luke replaced Hugh Freeze, who was fired in July for inappropriate conduct. The buzz around Ole Miss football is gone as the school awaits its punishment for NCAA violations committed under Freeze.

The Rebels come into this match up against Alabama as a four-touchdown underdog.

Alabama is coming off one of the most dominant performances of the Saban era, a 59-0 victory against Vanderbilt in which the Tide had as many first downs (38) as the Commodores had offensive plays (38).