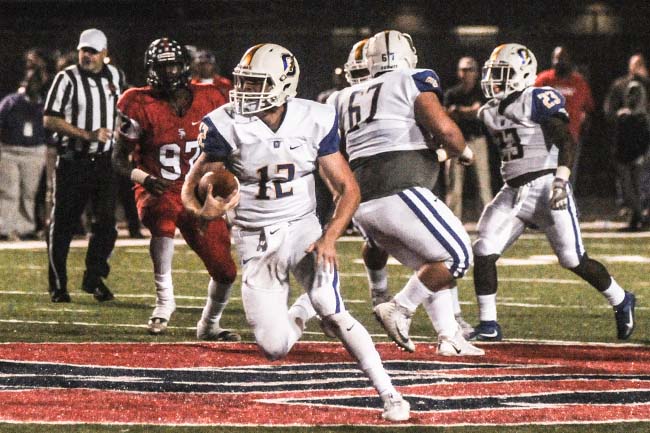 BATESVILLE — The mistakes continue and Oxford finds itself in a position it has not experienced in nearly a decade.

The Chargers traveled West on Highway 6 to play South Panola for the first time in 24 years and left with a 14-0 on Friday.

For a second straight week penalties plagued Oxford (4-3, 0-2 Region 1-6A). After racking up 85 yards against Southaven last week, the Chargers picked up 55 yards of penalties against South Panola (5-2, 1-1).

The yellow flag came out at crucial times for Oxford early, killing offensive drives and erased first down games on three separate occasions in the first quarter.

“I think offensively all night we were playing third and long,” Oxford head coach Chris Cutcliffe said. “Against a talented defense and talented pass rushers, that’s hard to do.”

Aside from the penalties, Oxford’s offense never truly found a rhythm on a night where they totaled 117 yards. It is the lowest offensive output this season.

The Chargers most successful drive of the night went only 36 yards and the most plays in a drive was nine.

Senior quarterback John Reece McClure completed eight of 12 passes for 106 yards and an interception. He also had eight carries for 12 yards, but lost 28 due to pressure from the South Panola defensive front.

With senior running back Hiram Wadlington sitting out for this second straight game due to a meniscus injury, KJ. Hadley took most of the snaps. Wadley struggled with only 29 yards on 11 carries.

“I thought we ran it well at times,” Cutcliffe said. “We did some OK things running the football in the second half and threw it pretty well. We just couldn’t sustain a drive.”

As has been the case all season, and the main reason Oxford has stayed in games, the defense shined for most of the game.

South Panola quarterback Patrick Shegog was kept in check by the Chargers’ defense outside of a few key plays. Shegog provided a balanced attack with 129 yards through the air and 135 yards plus a touchdown on the ground.

After a scoreless first half — which included a Shegog fumble on third and goal late in the second quarter — the Tigers found the end zone on their first drive of the third quarter.

Derrick Cunningham Jr. rushed for a one-yard touchdown five minutes into the second half to break the scoreless tie. Shegog’s score came on an 11-yard run with 3:29 left in the game.

“I thought we tackled pretty well,” Cutcliffe said. “And until the end of the game we kept (Shegog) from some long runs which was good to see. Definitely a lot of positive things. We just got to find a way to get on the scoreboard, obviously.”

Senior linebacker Quentin Wilfawn had a game-high 21 tackles, giving him over 100 on the year.

It will be a quick turnaround for Oxford, who finds themselves starting region play 0-2 for the first time since 2008. The Chargers host DeSoto Central on Thursday for Homecoming.