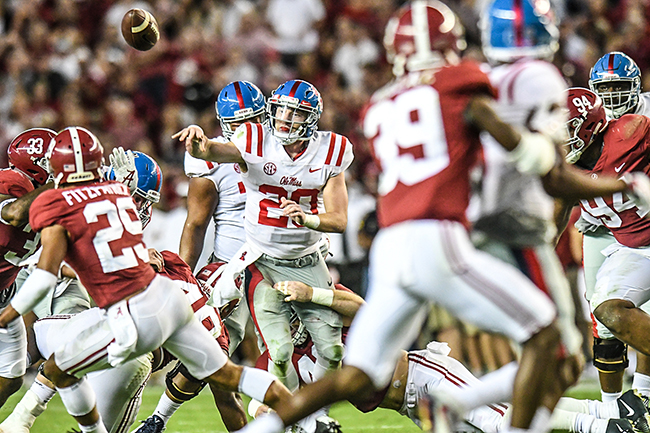 TUSCALOOSA, Ala. — Myles Hartsfield had a chance to halt Alabama’s momentum.

On the Crimson Tide’s second possession, Hartsfield stepped in front of a floating pass from Alabama quarterback Jalen Hurts in the end zone, but he couldn’t hang on to what would’ve been an interception, leaving Ole Miss’ sophomore cornerback to slap the Bryant-Denny Stadium turf in frustration.

Two plays later, Alabama got started on an avalanche of momentum that it never relinquished in a 66-3 thrashing of Ole Miss late Saturday night.

Bo Scarbrough got the Crimson Tide on the board with a 6-yard touchdown run two plays later. Forty-four seconds of game time later, Levi Wallace intercepted Shea Patterson’s third-down pass and returned it 35 yards to send most of the 101,821 in attendance into an early frenzy.

“You’ve got to make those plays,” interim coach Matt Luke said. You can’t turn it over for a touchdown, and when they throw you one, if we catch that, that would be a huge turning point in the game.”

Alabama’s offense followed with 85- and 75-yard scoring drives on its next two possessions — the latter answering a 26-yard field goal by Gary Wunderlich — to open up a 28-3 lead just minutes into the second quarter, putting the nation’s top-ranked team well on its way to its 26th straight regular-season win in dominant fashion.

“Obviously when you’re playing on the road, you want to take the crowd out of it as early as possible,” Patterson said. “The offense put up three points the whole game so we really didn’t help out our defense a lot. Didn’t play very well at all tonight.”

Ole Miss was outgained 330-138 in total yards in the first half with the Rebels’ playcalling getting more predictable as Alabama’s lead grew. Seven of the Rebels’ eight possessions in the first two quarters ended in a punt or turnover with five of those drives netting 8 yards or less.

The Rebels had a chance to cut into a 21-3 deficit midway through the second quarter when back-to-back personal fouls helped them get to Alabama’s 39-yard line, but a 12-yard sack of Patterson — one of five for Alabama — on Ole Miss’ ensuing third down pushed the Rebels out of field-goal range. Hurts found Josh Jacobs for an 18-yard touchdown pass on Alabama’s ensuing possession before the Tide took a commanding 35-3 lead on Hurts’ 10-yard scoring run with 3:42 left before halftime.

“You’ve got to take advantage with every opportunity,” Luke said, “and we didn’t do that tonight.”

Alabama finished with 613 yards while Ole Miss was held to a season-low 253. Senior running back Jordan Wilkins was the lone bright spot offensively with 102 yards on the ground, though 65 of those came on two runs with a 44-yarder — the Rebels’ longest run of the season — coming with the game well in hand in the second half.

Ole Miss also didn’t convert any of its 13 third downs.

“It was our goal going into the game not to get into third-and-long situations that we did at Cal,” offensive coordinator Phil Longo said. “I thought we established a little bit of a run game as the game went on, but that didn’t happen enough.”

The slow start turned into the second-largest margin of defeat in the series for the Rebels. Only a 64-0 loss in 1930 was worse.

“They came out ready,” Wilkins said. “They deserve it.”

No. 1 Alabama too much for Ole Miss in…